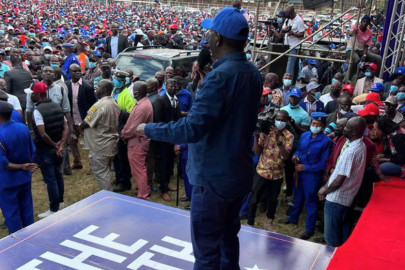 Odinga criticized the deputy president saying he has been, and still is, in power but instead of delivering on his promises from the past election cycle, he is busy dispensing more pledges that he may never fulfill.

Speaking during a campaign rally at Thika Stadium on Saturday, the ODM leader cited promises made by the DP in 2013 and 2017 such as free laptops to learners, stadiums in various counties and more jobs to the youth which he said have not been honored.

According to Odinga, it is now time for DP Ruto to leave government and allow more capable people to come in and work for the people.

The former premier downplayed DP Ruto’s promises and the hustler narrative terming them as unrealistic and inconsistent to Kenyans.

Odinga compared the laptops prior promised by the DP with the current wheelbarrow campaigns saying that it was just double standards.

Odinga consequently warned Thika residents against falling victims to the DP’s new promises, instead urging them to first hold him to account for previous ones.

He further lashed at the DP over his perceived extravagant church donations and harambee contributions, questioning his source of wealth.

While exuding confidence in clinching the presidential seat in August, Odinga vowed to lawfully oversee the prosecution of all corrupt leaders and seal all graft loopholes.

Odinga also used the rally as a chance to sell his Azimio la Umoja agenda to Thika residents, where he listed his government’s key focus as smart agriculture, health program, as well as a social protection fund.

He went forth to defend his social protection fund that entails giving a Ksh.6,000 monthly stipend to low income homes, which has since attracted a lot of criticism from opponents who have termed it as not achievable.

Odinga reaffirmed the certainty of his program noting that it was centered on boosting the livelihoods of the less fortunate.