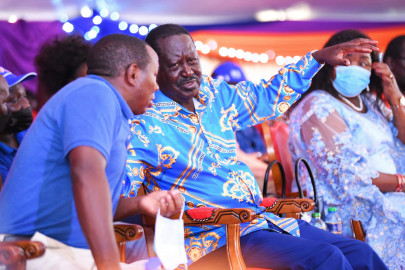 ODM leader Raila Odinga has continued to discount his political rival Deputy President William Ruto presidential bid saying that he (Ruto) has not delivered during his tenure and should pave way for new leadership.

Odinga faulted the deputy president over the unsettled developments he promised to Kenyans deeming him incapable to deliver to Kenyans.

The former premier accused Ruto of not owning up to his failures, adding that the DP has instead been blaming the Handshake for his shortcomings.

The former Prime Minister was speaking at Kehancha Stadium in Kuria, Migori County where he championed his Azimio la Umoja movement.

Odinga further criticized the DP following his huge donations at his rallies where he linked him to misappropriation of government funds and corruption allegations.

Consequently, Odinga assured residents that his administration would revamp the country’s economy by focusing on the devolution sector, water, electricity, education and health sector.

At the same time, Odinga dismissed as false the DP's claims of having transformed the energy sector in the rural electrification program stating that he was riding on ghost projects.

Similarly, Odinga reaffirmed his understanding of the region and the problems affecting the residents exuding confidence that he bore the solution for all of them.

Under Azimio, Odinga promised that education would be free, smart farming supported to boost the farming sector, health sector would be revamped through insurance coverage and also emphasized on the social protection fund program where every needy family would be awarded a monthly stipend of Ksh. 6,000.

Odinga went forth to address the challenge of floods in the region and land disputes where he promised to set up dams and lead in border talks with neighbouring Tanzania.

In his Thursday itinerary, Odinga was accompanied by his first lady Ida Odinga and leaders such as governor Nderitu Muriithi (Laikipia), James Ongwae (Kisii), Anyang' Nyong'o (Kisumu) and Cyprian Awiti (Homa Bay) among others.