DP Ruto defends his huge donations as he tells off Raila 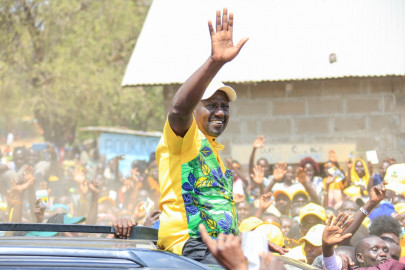 Deputy President William Ruto has rubbished the criticism by ODM leader Raila Odinga over his cash donations saying that he (Ruto) understands the needs of Kenyans better.

The Deputy President emphasized that he was making donations as a way of helping the less fortunate since he was once in their position.

The DP said ODM leader cannot come to terms with his actions of giving to the needy since he (Raila) has not experienced poverty.

In a thinly-veiled attack that seemed to cut through his rivals under Azimio La Umoja, Ruto idealized his social background to be more relatable to the ordinary Kenyan.

DP Ruto pointed out that having risen from a humble background, he understood the plight of ordinary citizens compared to Odinga who he said has not experienced poverty.

He cited how he was a poultry farmer and was focused on improving the livelihoods of all Kenyans and bridging the widening gap between the rich and the poor.

At the same time, while drumming up support for his bottom-up economic agenda, the DP urged West Pokot residents to elect a presidential candidate who had all the interests of Kenyans at heart and based on their track record.

DP Ruto downplayed his competitors' political agendas exuding confidence that his UDA party was far much superior and favourable to trounce his competitors come the August polls.

While referring to the Azimio la Umoja leader as a state project imposed on Kenyans against their will, Ruto cautioned residents against being steered to follow a certain leader.

"We respect you because of your age but respect our youth; hawa si watu wa kupangwa na handouts."