'The body is willing but the spirit is weak': Wetangula on chances of working with Raila in 2022 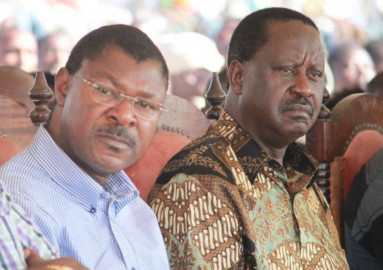 According to Wetangula, nothing is set in stone when it comes to the intricate game of politics, as such the notion of him working with Odinga, while improbable, cannot be entirely dismissed.

“In politics, you never say never but sometimes Jesus said, the body is willing but the spirit is weak,” Wetangula told the Nation newspaper.

Wetangula however proceeded to say that his ouster as minority leader of the Senate in 2018, which he claims was orchestrated by Odinga, lingers in his mind.

At the time, Wetangula was replaced by his Siaya counterpart James Orengo in what the One Kenya Alliance (OKA) co-principal labelled a humiliating dismissal.

“What Raila and his team did to me in the Senate was so humiliating and definitely, it hurt many people I represent. I have been winning elections in my constituency and county and those are people who believe in me,” Wetangula explained.

The Ford Kenya leader however admitted that he does not have the capacity to hold grudges against Odinga citing that he would take a page out of the late president Jomo Kenyatta’s book when he referenced the brutality he suffered at the hands of the British Colonial masters pre-independence.

“As an individual who suffered in their hands, and as a nation that has been humiliated at their hands, we forgive freely but the capacity to forget is minimal,” Wetangula recollected the former president’s words.

He consequently dismissed assertions that the OKA coalition was only formed as a foil to deter Odinga’s political undertakings, citing that the principals’ shared interests and unwavering trust in each other brought the coalition into being.

“It is foolhardy to form a party on the basis of aspersions because when you are carrying the heavy burdens in the political landscapes in Kenya, the burdens will be too heavy,” he said.

“But, truth be told, as CORD, as NASA, each of the partners of Odinga have serious grievances in the manner in which the coalition was handled, the handshake was engineered. ODM has continued to arrogantly manage and handle the parties fund with the exclusion of others, without genuine explanation and accounting for them.”

He added: “As we speak, Ford-Kenya and Wiper have never received any single cent from the CORD coalition despite the fact that the funds were paid to ODM and that is not something that any party would forget and forgive easily.”

While accepting that Odinga and Deputy President William Ruto are more visible in the race to State House owing to the fact that they made their intentions to contest for the presidency much earlier, Wetangula asserted that OKA might cause a major upset at the polls.

“OKA is in the race, the victory in any race is judged by who beats the tape first, and not who starts the race first. In a marathon, the pacesetters and the rabbits that run ahead of the pack fall by the way as the real runners come to win the race. I believe OKA are the real runners in this race in 2022,” Wetangula stated.