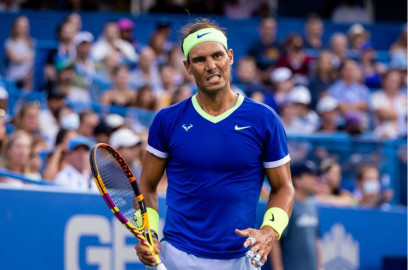 The top seed is still scheduled to play at the Australian Open on Monday.

Rafael Nadal says the Australian Open will be "great with or without" Novak Djokovic as the world number one's visa drama remains unresolved.

But the 35-year-old Spaniard said he is getting "tired" of the Serb's situation dominating the tournament build-up.

"There is no player in history who's more important than an event," he said.

Djokovic, 34, faces deportation after his visa was cancelled for a second time and will appeal against the decision in a hearing on Sunday.

The top seed is still scheduled to play at the Australian Open on Monday.

Djokovic has been detained in Melbourne before Sunday's court hearing, which takes place at 09:30 local time (22:30 GMT on Saturday).

The Australian government has described Djokovic as a threat to public health, with his lawyers appealing against what they called an "irrational" judgement.

"From my point of view there are a lot of questions that need to be answered," said Nadal, who is seeded sixth.

"I think it will be good if everything clarifies soon. Everyone chooses his road. I respect Novak as a person, of course, and as an athlete, without a doubt.

"I really respect him, even if I do not agree with a lot of things that he did the last couple of weeks."