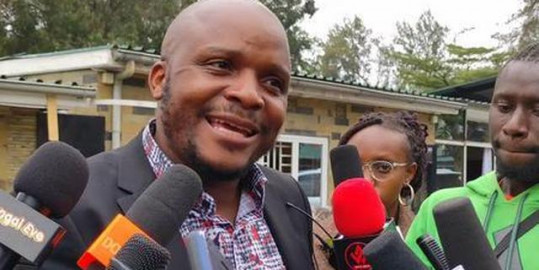 Langata parliamentay seat hopeful  Jalang’o has disclosed that he will go back to being a radio personality in the event his political bid flops.

Jalango who is adding to his multi-faceted list of careers: from a radio host, to a comedian, a master of ceremonies, and a businessman, has now thrown his hat into the proverbial political ring.

Speaking during his show on radio, Jalang’o revealed that he has signed a contract that will see him back in the studio if he fails to secure the Lang’ata Member of Parliament seat.

“In my life, I have never done anything that I have to lose. God forbid…if I lose, is that the end of the world? We pick up from where we left and move on. I have even been made to sign a very hard contract here… that if I lose, the next day I will be in the studio, ” he said.

Jalang’o, who hosts a breakfast show alongside Kamene Goro recently announced that he will be quitting his position in February to intensify his campaigns.

This is in accordance with the Media Council of Kenya (MCK), which issued  directives for media practitioners seeking political seats in the 2022 general election.

In August 2021, the regulatory body stated that journalists who want to run for political office should resign from their posts 6 months before the polls.

“As it applies in the public service where civil servants intending to vie for political office are required to leave office six months to elections and are under strict edicts not to use their space and influence to campaign for political office, the media is no exception,” MCK announced.

The media personality joined the Orange Democratic Movement (ODM) party as a life member, and now hopes to clinch the coveted ODM ticket

The funny man will be up against fellow candidates eyeing the Lang’ata seat who include; Jaoko Oburu, nephew to veteran politician Raila Odinga, incumbent Nick Korir and football administrator Nicholas Musonye.

Jalang'o who also owns an online television station (Jalang’o TV), graduated from Daystar University with a Degree in Community Development.

“I choose community development because, as MP for Lang’ata constituency, I have to be able to take care of community matters,” Jalas said in a previous interview.