Mwalimu Rachel opens up on her fallout with boy band Sailors: I did not kill their careers 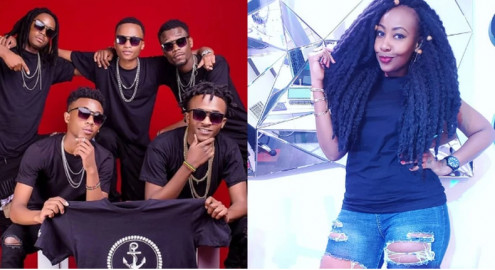 Media personality Mwalimu Rachel has now told her side of the story in the fall out of popular gengetone music group Sailors.

Sailors parted ways with their manager, Mwalimu Rachel, in 2019 and later accused the media personality of blocking access to their YouTube channel.

When the news went viral, fans of Sailors demanded the release of the YouTube account, and according to Rachel, while speaking to Nation on Sunday, the negativity on social media has over time,  become too much to handle.

“The negativity I have found online has really shaken me. My son and I have received death threats from the fans because of the YouTube channel,”

Rachel maintains that she did not kill the boy group's careers, maintaining that she has always had somewhat of motherly love towards the group.

“I did not kill their career. People think I did and they have gone ahead and asked my bosses to fire me yet they know nothing about the story. Unfortunately, social media is the way it is and nothing can be done about that,” she said.

"I have always kept quiet because I’m not only protecting myself but them also. And they know this. You do not relinquish your motherly care because of turmoil, and that motherly love has always been there."

Rachel says that the Sailors gang first reached out to her and asked her to share the ‘Wamlambez’ hit song on her YouTube channel.

According to Rachel, she tried to advise the group to open their own channel but they felt it would take long to amass subscribers.

“They came to me when my company was doing outreach programmes for the youth…They sent me the song on WhatsApp and later that week, I played it on the radio and people liked it,” she said.

According to the MRX media CEO, during the pandemic, amid a decrease of gigs and shows, the ‘Wamlambez’ hitmakers sought out a new label without her consent and as a businesswoman, it did not make sense to hand over the group’s logins before getting her dues.

Rachel added that she was charging the record label for the ownership of the YouTube channel and not the Sailors group.

“As a business that has no binding contract or agreement with a third party, would it really make sense to just hand over logins? The simple answer is no. After all it’s just business, nothing personal, but I know there’s a proper way to do it," said Mwalimu Rachel.

She added: "I estimated the value of that channel and the work my team and I put in it, at Ksh1.5 Million (I’m starting to think I underquoted). I was charging the record label so that they can take the ownership of this channel. I was not charging sailors.”

Rachel says thereafter she cleared all the money in the group’s savings account, which she had opened at the start of the pandemic, and sent to them.

“I didn’t want a penny, whatever was remaining in the savings account I cleared and gave it to them,” she disclosed.

Rachel also revealed that the Sailors group later contacted her in October 2021 however she turned them down asking them to follow due process lest the same incident occurs again.

“I told them they first talk to their new label so that history doesn’t repeat itself,” she stated.

On January 6, Sailors gang frontman Peter Miracle Baby took to Instagram to respond to netizens who were asking about the whereabouts of the group.

The musician asked fans to put the many questions to bed, claiming that no one spoke up when the group underwent a series of injustices in the last couple of years.