Simiyu to give "young" players chance in Safari Sevens 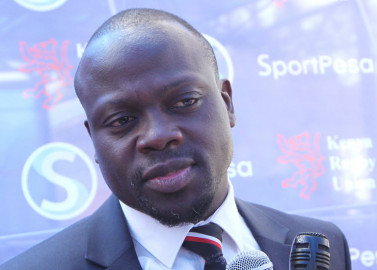 Kenya Sevens squad head coach Innocent Simiyu addresses the media during the naming of Sevens squad for the Wellington and Sydney Sevens at the RFUEA Ground on January 17, 2018. Photo/sportpicha.com

This is in line with his development agenda of the Shujaa squad, while some of the senior players will be out with the 15s team in South Africa.

“I want to give all players a chance to play in the national team and get exposure, especially the young players," said Simiyu.

Simiyu will also be missing KCB RFC players who will be competing in the Safari Sevens as a separate entity, while other Shujaa regulars expected to play for Kenya Morans.

“We had a short time to prepare for the tournament but I’m glad we have two teams in the tourney from Kenya KCB RFC and Kenya Morans who will give our players a chance to play in an international tournament,” added Simiyu.

A total of 14 teams have confirmed their participation in the weekends tournament including; South Africa All Stars, Zimbabwe, Uganda, Samurai, Red Wailers, Stallion Sevens Nigeria, KCB, Kenya U20, Kenya Shujaa and Kenya Morans.

Last year’s edition was skipped due to Covid-19 pandemic, after Kenya Morans won the last edition to be held in 2019.