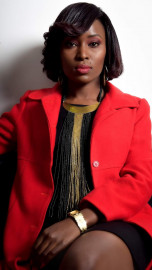 This week in the #KenyaWomenSeries, we feature Bina Maseno, a gender equality advocate who grew up in Kayole and had to overcome all odds including disease, poverty and crime to re-write the story of her life. Bina is the founder of Badili Africa, a Social Advocacy organisation that was born from her experience having run for a political office at the age of 23years.

I am a passionate advocate for gender equality. I lost four friends I schooled and grew up with in Kayole. They had joined a gang. The dilapidated state of the environment I grew up in, fed my passion for community development at a very young age.

At the age of 23, I ventured into politics and ran for political office for the Member of County Assembly. It was quite a big risk taking a break from campus given that I was being supported financially to study as my parents could barely afford to support our education. My challenges and experiences while running for political office as a young woman inspired the founding of Badili Africa.

Before founding Badili Africa, I worked for International Foundation for Electoral Systems (IFES – Kenya). I was the program officer, contributing to the co-creation of programs and advocacy campaigns aimed at cultivating informed choices and active participation of women and youth in electoral processes. I had also worked as a journalist at K24 which gave me a unique opportunity of working with marginalized and underserved communities.

b). The work you do at Badili Africa has been appreciated globally, what does this mean to you?

As a community mobilizer, facilitator, mentor, speaker and moderator, it has been an honour to be invited to and take part in global discussions across initiatives like; the Obama Africa Leaders Program in South Africa, the Bill and Melinda Gates Goalkeepers in New York, USA, African Union regional meetings, United Nations Population Fund Africa and Women at Dev among others.

The exposure has enriched my perspective on African leadership and how our challenges are so interconnected and will need us to be intentional in building solidarity towards solving them. It has also expanded my leadership skills in governance, development and policymaking.

2. As a journalist and Communication Specialist walk us through your career journey, some of the events that have shaped it and your proud moments?

My journalism journey enriched my understanding of issues I have grown to be passionate about and exposed me to how social justice efforts, legislation and politics can affect citizens’ wellbeing.

One of my highlights was a story I focused on recognizing the important role the informal sector plays in our economy to encourage more young people to embrace and transform the sector as opposed to waiting for blue-collar jobs that are not easy to come by. The World Bank’s Kenya economic update estimates 800,000 youth reach working age annually yet only 50,000 new formal modern wage jobs are created. The Informal sector represents a whopping 82.7% of employment according to research by the Institute of Economic Affairs.

3. You ran for political office as a 23-year-old. Please paint a picture for us about your experience, some challenges you faced and three key lessons you learnt?

Nothing prepares you enough for the world of politics not even the workshops I attended. Campaigning was quite costly for me coupled with balancing political life with university studies and domestic responsibilities, dealing with self-identity issues, security issues and electoral violence. Then there’s the reality of losing the elections, the trauma that accompanies it, the struggle to find work opportunities because people are hesitant to employ a “politician” or the challenge of raising resources to start or resurrect a business after spending everything in the campaigns.

Electoral violence remains a key deterrent to women participating in political leadership spaces. One time after addressing a crowd late in the evening, there was a commotion, and someone tried to pull down my skirt. I reported the matter the next day to the police and shared all the threats I had received through text messages. All they said was that was the nature of politics and that I should quit if I can’t develop a thick skin. I reached out to the male politicians I knew at the time on the same matter. Their advice was mainly how I needed to learn real quick how to show my capacity for violence as a survival tactic.

One time, I had the honour of co-hosting Hon. Peter Kenneth in Embakasi central constituency when he was aspiring to be our President. The event was filled as we had put so much effort into mobilizing the masses for the day. In the middle of the speeches, my campaign manager alerted me that some goons were threatening to cause chaos because I did not pay them to allow the meeting to take place. I panicked but kept calm. The event was quite successful, and it gave my candidacy good visibility especially when Hon. Peter Kenneth drummed up support for me promising my constituents he’d journey with me if they elected me to ensure our Constituency, Embakasi Central thrived like Gatanga which was leading at the time as the best performing constituency.

Needless to say, while the political leaders were exiting the scene, chaos erupted. Everything was destroyed, the seats, the tents and the public address system. A cost that I painfully had to bear given the limited resources I had as I had hired everything. Part of the crowd moved to my home nearby and began chanting that I share the money Hon. Kenneth had given me. I tried to explain he hadn’t given me any resources, all in futility. They kept shouting “President mzima hawezi enda bila kuacha za macho na tunasikia ako na doo mbaya na unataka kula peke yako” . Translated to a “whole aspiring and rich President could not have left without giving you money that you want to eat alone.” At the end of the day, I had to part with some resources.

Altogether, running for office gave me a unique opportunity and in-depth understanding of the challenges affecting my community and how it is tied to our National and Global politics. Interacting with people’s lived realities every day also opened my eyes to how certain groups are marginalized and underserved. These experiences have continued to fuel the work we do at Badili Africa.

Not now. Maybe in the future. At Badili Africa, we are currently strengthening the leadership capacities of some of our Chama women leaders who have expressed interest in running in the upcoming general elections and political party grassroots elections.

4. As a Founder and Director of an organization that drives social change, tell us more about Badili Africa. What inspired you, what’s your vision for it and what are some of the activities you are engaged in to help increase the number of young women who engage with political processes?

I equally observed how politicians would leverage on grassroots women’s networks majority of them organizing in Chamas to win their political seats but once the elections and transfers took place, these grassroots women leaders would start all over again and struggle to be listened to and recognized as stakeholders by the new leaders in office. Research in Kenya has also shown that the most disenfranchised lot is young women between 18-25 years who do not care much about politics and governance.

So at Badili Africa, we cultivate the political awareness and engagement of young women between the age of 16 – 30 in Universities who are disenfranchised, disengaged and disillusioned by politics. We mobilize marginalized young women in the informal settlement whose poverty renders them invisible and voiceless and consequently leads to their routine exclusion from civic dialogues and the multiple political spaces created by the Constitution of Kenya.

Badili Africa also nurtures and strengthens the leadership capacities of Chama women as pressure groups for demanding accountability on public service delivery and inclusion in decision-making processes. We also seek to end sexual and gender-based violence against women and girls as a key deterrent to them participating effectively in leadership spaces.

Badili Africa envisions these that these women and girls begin to interface with, and understand the power structures and decision-making processes of government institutions and how they can affect these and influence plans, programs and policies in ways that prioritize their needs.

5. Given an opportunity to re-imagine the world (for women and girls), is there is anything you would change? If yes, what will it be and why?

Yes. Women’s voices and participation is still peripheral in our politics both locally and globally. Largely women comprise slightly over 50% of the population in Kenya, however, their participation in the electoral process does not reflect this demographic reality. A direct consequence of this has been a clear underrepresentation of women’s issues at policy, legislation and national budget levels. I would love to see a world where women and girls’ rise to take up leadership positions, government institutions, the private sector and civil society to transform the leadership sector.

6. What does the future look like for women in politics? What is your take on levelling the ground? Please share your experience and aspirations with us.

We have a constitution that supports and enables gender equality and we all must do our part to support and push for its implementation and respect of the rule of law.

We must seek an end to violence against women in politics as it continues to be normalized as part of political practice in the contest for power but has severe impacts emotionally, physically and financially. We need to start nurturing young women’s political ambition early. At Badili Africa, we are very deliberate in cultivating and strengthening young women’s leadership capacities in varied ways to catalyze and lead positive change in their university spaces.

7. Tell us what role has each of the following aspects played in your career life, giving a brief of your real-life experiences?

8. If I was to choose the two most important values I’d start with:

9. With the elections just around the corner what plans does Badili Africa have?

The majority of our target audience in universities and informal settlements belong to a cohort that will vote for the first time in the upcoming 2022 elections. Equally, Chama women organizing, and decision-making skills rarely translate to meaningful engagement or voice in political, economic or good governance platforms where they can influence basic public service provision and yet they bear the brunt of lack of access to these services and inclusion in decision-making processes hence the Chamas, to fill in gaps created by poor politics. Badili Africa will build the capacities of these demographics to participate effectively in electoral processes and make informed choices.

We are currently strengthening the capacities of some of our Chama women leaders who will run for office in the coming elections and political party grassroots elections. We are currently working on a research study that will be released early in the year on the electoral violence meted on different political actors during elections to inform electoral security interventions by the state and non-state actors.

Be the change you want to see in your community, home, church, workplace, relationship. Don’t just talk about what needs to happen, do something in your little ways. I saw a gap in the society and that is how Badili Africa was born and we are contributing in our small ways to having more Chama women and young women take part effectively in socio-economic and political processes.