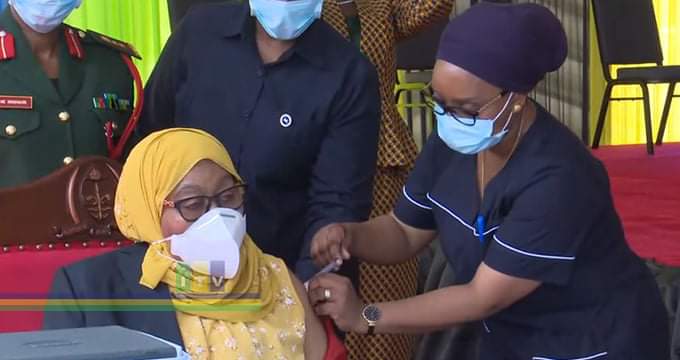 Tanzania’s President, Samia Suluhu Hassan, has received her dose of the single-shot Johnson & Johnson vaccine as the country begins a mass vaccination campaign.

The President who succeeded the late Magufuli has reversed course, urging Tanzanians to follow health guidelines as the country battles a third wave of the disease.

“We are in the third phase of the pandemic. We should take all precautions,” she said at a meeting with media editors in the statehouse in Dar es Salaam, the commercial capital.

Tanzania received just over one million doses from COVAX a week ago and appears to be gradually embracing the fight against the global pandemic.

Tanzania was one of four African countries that refused to vaccinate their citizens (along with Burundi, Eritrea and Madagascar).

According to a Ministry of Health statement on July 22, the country now hopes to vaccinate 60% of its 58 million-person population, with a focus on health workers.

There is no explanation for why that percentage was chosen, nor is there a timetable for achieving this goal.