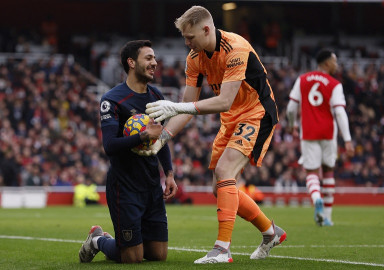 Struggling Burnley earned a precious point in a 0-0 draw at Arsenal in the Premier League on Sunday, with their back line and keeper doing just enough to keep out the misfiring Gunners.

Arsenal dominated possession and registered no fewer than 20 attempts on goal, twice as many as the visitors, but the home side were let down by some wayward finishing, with only five of those shots on target.

Burnley, playing only their second league game of the year after COVID outbreaks, pressed hard early on, Dwight McNeil going close with a powerful cross from outside the box that Arsenal keeper Aaron Ramsdale tipped over the bar.

Arsenal's Alexandre Lacazette, Martin Odegaard, Kieran Tierney and Bukayo Saka all had goal attempts but were either off target or not good enough to beat Clarets keeper Nick Pope.

The hosts came to life again halfway through the second half, with Emile Smith Rowe and Gabriel Martinelli creating numerous chances in a breathless period of play. But despite all the pressure they were unable to find the back of the net.

The best chance of the game came when Smith Rowe beat James Tarkowski on the left and whipped the ball to Alexandre Lacazette, only for the Frenchman to stab his shot wide of the post.

"We tried in every different way but lacked the quality in the final third," Arsenal manager Mikel Arteta told the BBC.

"You need spark and creativity to win football matches and today we didn't do that."

Arsenal moved above Tottenham Hotspur on goal difference to sixth place, ahead of Spurs' late game at Chelsea.

Burnley stayed bottom on 12 points but are now only four points from the safety zone - and with at least two games in hand on the three teams above them.