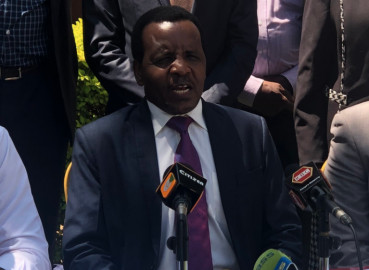 Kigame officially kick started his campaigns at the Musinaka Primary School in his home county.

He was welcomed by area residents in traditional song and dance.

Kigame, who has through his music career released 29 albums, declared his interest in the country's top seat last year.

In a later interview, he pledged to serve all Kenyans equally if elected to the position of Head of State, replacing President Uhuru Kenyatta.

"I will be President for all. My priority would be to ask, have they eaten, do they have medicines, do they have jobs? They are first human before anything else," he told Spice FM in July 2021.

"I believe in protecting life from conception to natural death. This is not only biblical. It is also constitutional according to article 26.”

He further added: "I am a Christian but presidency implies I must serve everyone equally and fairly. I will be a President also for Muslims, Hindus, atheists, and so on. All need servant leadership.