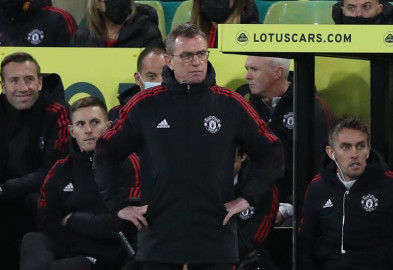 England's soccer governing bodies must sit down and discuss whether it is feasible to have both the FA Cup and the League Cup in a calendar where teams play too many games, Manchester United interim boss Ralf Rangnick said on Thursday.

Rangnick added he had no issues with sticking to the tradition of playing over the festive period and looked forward to experiencing it for the first time in his coaching career but wanted to discuss scrapping cup replays and playing in two cups.

"I know the League Cup is still kept for the third and fourth division teams, especially to improve the financial situations of those clubs. But I still think, if we speak about a tight calendar, (we are) playing too many games.

"The other issue changed in the last two weeks is in the FA Cup after a draw you have to have a replay. This had been changed now, I think this is a good idea. In other countries, you play extra time and penalties, and never have replays."

FA Cup replays in rounds three and four this season have been scrapped to help clear the fixture backlog after several postponements but four Premier League teams will play two-legged semi-finals in the League Cup next month.

Manchester City manager Pep Guardiola had said earlier on Thursday that it was imperative the Premier League switch to five substitutions per game to ease the workload on players and Rangnick echoed the sentiment.

"It was decided every team could substitute five players when COVID started 18 months ago. I think it was the right decision to have more options to change players, to save energy for players, especially if they have only just recovered from COVID," the German coach said.

"The same is true right now, we have a similar situation to as we had one-and-a-half years ago ... England is the only country where they don't allow five subs."

United have had two Premier League games called off due to a COVID-19 outbreak in the squad and Rangnick said everyone was finally back and available for Monday's trip to Newcastle United barring injured midfielder Paul Pogba.

United are sixth in the standings with 27 points but have two games in hand on the top four.