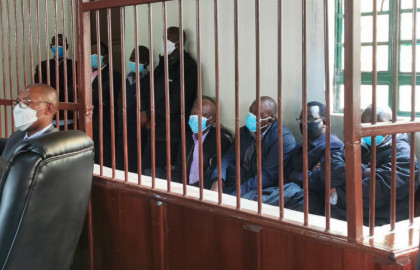 A Kiambu court has directed that nine senior Kenya Power employees arrested on Tuesday be detained for a further eight days to allow for investigations over their alleged involvement in the countrywide power outages experienced in different parts of the country last week.

The nine suspects were arraigned at Kahawa Law Courts on Wednesday before Senior Principal Magistrate Boaz Ombewa who ordered that they be held at Muthaiga Police Station until January 26, when their case will be mentioned.

"I have considered the submissions made in court by both parties and I am convinced by the prosecution team’s submissions that they need more time to conclude the investigation,” Magistrate Ombewa.

“The respondents be detained for eight days at Muthaiga Police station and come back on January 26 for mention."

In the court hearing, Magistrate Ombewa heard that the nine suspects’ indecisiveness to act on a December 9, 2021 tip off highlighting the destruction of power lines subsequently led to the nationwide blackout.

While ceding that the power outage largely occurred due to laxity, one of the accused persons’ lawyers Danstan Omari, expressed regret that the matter had now been labelled an act of economic sabotage.

“This is not the first time power blackout has been witnessed in the country. This is a mere negligence matter, but the State has decided to engage in a public relations exercise to incite Kenyans that these are terrorists by accusing them with economic sabotage,” lawyer Omari said.

The accused persons’ defence team earlier sought to have them released on a cash bail but their request was dismissed by the prosecution over claims that the suspects would interfere with vital evidence and intimidate key witnesses.