Raila Odinga: It is possible to change, I promise you a different Kenya in 5 years 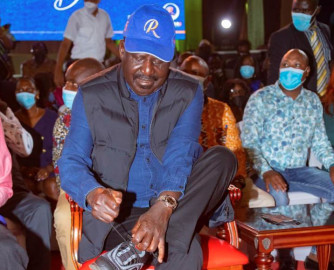 ODM leader Raila Odinga during his 77th birthday celebration at the Bomas of Kenya on January 7, 2022. PHOTO | COURTESY

Orange Democratic Movement (ODM) party leader and 2022 presidential aspirant Raila Odinga now says it is possible to better Kenya’s economic trajectory, provided there is a change to the mindset of the country’s leadership.

Odinga, who spoke during his 77th birthday celebration at the Bomas of Kenya on Friday, sought to reassure Kenyans that he has the necessary experience the country needs in order to move forward and compete with nations such as China, South Korea and Germany.

The former premier said he has either visited or lived in most developed nations and had the chance to witness firsthand how efficient governments work, hence he wants a chance to replicate the same in Kenya if elected president.

According to the African Union High Representative for Infrastructure Development, Kenya was at par with South Korea post-independence in 1963, but that the latter’s economy is now 45 times greater than that of Kenya.

“We can transform and make this country an industrialized country. I know it, I lived in Germany for many years. Germany was destroyed during the world war, and within 15 years they had constructed their economy and it was stronger than the victor powers’ economies.  If you went to Germany and Britain, you would think Britain lost the war and Germany won,” he said.

“It is possible to change, but we must change the way we do things; we must change how we approach the development of a country. China was able to move 300 million people from poverty to middle income status, China now has the biggest middle income in the whole world….over 300 billionaires in 30 years time. Ata hapa tunaweza.”

The ODM chief went ahead to state that the blueprint for the country’s development was developed under the Vision 2030 banner during the coalition government era with himself as Prime Minister and retired president Mwai Kibaki leading the nation.

He, hence, added that all that is needed now is the right force to ensure implementation of that blueprint, and the country would be miles ahead as far as the economy, infrastructure and other sectors are concerned.

“Kenya is strategically situated on the Eastern Coast of Africa, there are so many countries in our hinterland. We’ve got a big market that we can supply with goods manufactured in Kenya,” he said.

“We already conceived Vision 2030 with Kibaki, so we know where we’re coming from and where we want to go, all we need is the willpower to implement this vision. And we’ll move this country to middle-income status by 2030.”

Odinga further, in a thinly-veiled attack, hit out at Deputy President William Ruto over his incessant harambee donations, questioning the source of his wealth while alleging that the monthly contributions run into over Ksh.100 million despite his salary being only Ksh.2 million.

He also reiterated his earlier promise to the electorates that, should he ascend to the presidency, then every low income household would be entitled to a monthly Ksh.6,000 stipend from the government.