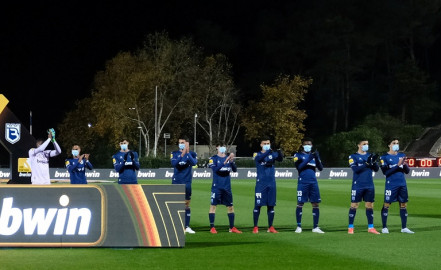 FILE PHOTO: Soccer Football - Primeira Liga - Belenenses v Benfica - Estadio Nacional, Oeiras, Portugal - November 27, 2021 Belenenses during the line up before the match with only 9 players due to a COVID-19 outbreak in the club REUTERS/Pedro Nunes/File Photo

Portugal's football league said on Wednesday that all professional players must get tested for COVID-19 ahead of every match after a game had to be abandoned last week due to an outbreak.

The league said in a statement that it had informed clubs that all players must take an antigen test 48 hours before a match and said masks must be used on the bench.

Lisbon club Belenenses SAD started with only nine players in their Primeira Liga match against Benfica on Saturday, with the rest of the squad isolating at home after a number of players and staff tested positive for COVID-19.

Only seven players returned to the field after halftime, and the match was abandoned minutes into the second half with Benfica leading 7-0.

Portugal has detected 14 cases of the Omicron variant, and 13 of those involve players and staff from Belenenses.

The country, which recently reimposed restrictions, reported 4,670 new infections on Wednesday, the highest daily jump since the beginning of February, when it faced its toughest battle against the virus.

The Belenenses club doctor was one of those who caught the Omicron variant, forcing a large hospital near Lisbon, where he also works, to temporarily shut two of its paediatric departments.