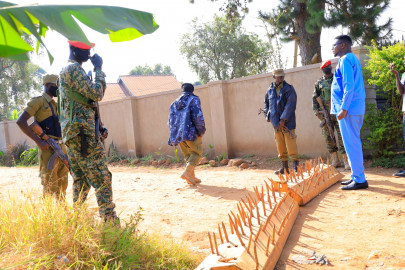 Kyagulanyi was expected to hold a rally in Kayunga District on Tuesday in support of NUP's Harriet Nakweede ahead of the district chairman election on December 16.

According to local media reports, the elections have sparked a fierce battle between Nakweede and Andrew Muwonge, a candidate for President Museveni's National Resistance Movement (NRM).

Museveni was also expected in Kayunga on Tuesday, according to Kayunga Resident District Commissioner Kigozi Sempala.

Kyagulanyi had not communicated his presence, according to Sempala, and could not be allowed in the area for fear of 'compromiting' the president's security.

Military officers were seen manning Kyagulanyi’s gate, where roadblocks had been mounted a few meters away.

“This morning, ahead of my planned visit to Kayunga District to campaign for our flag bearer, the police and military deployed overnight around my home in an apparent attempt to block me from leaving,” wrote Kayunga in a Tuesday morning tweet.

He further claimed that no one was allowed access into or out of his home by the officers, adding that his security guard and gardener had been arrested and beaten up.