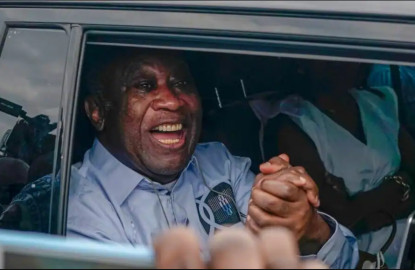 Gbagbo, 76, who returned home in June after his acquittal was upheld, announced a few months later that he would be setting up a new party in order to avoid legal battles with his former ally, Pascal Affi N'Guessan.

Gbagbo was extradited to The Hague in 2011 and his Ivorian Popular Front party splintered three years later — with one faction led by N'Guessan, while former first lady Simone Gbagbo played a prominent role in the other.

On Saturday, Gbagbo greeted a crowd of more than 1,600 delegates in Abidjan, many holding small flags bearing his image. The ex-president is expected to address his supporters on Sunday, organizers said.

The creation of Gbagbo's new political party comes amid lingering questions about his future political aspirations. He served as president from 2000 until his arrest in 2011 after he refused to concede defeat to Alassane Ouattara. The post-election conflict left more than 3,000 people dead and brought the country back to the brink of civil war.

Ouattara ultimately prevailed and has been the president of Ivory Coast ever since.

Ouattara won a controversial third term late last year after the opposition claimed many of its candidates were disqualified, including Gbagbo.

On Saturday, the executive director of the ruling party, Adama Bictogo, was among those in attendance at the party congress.

"For us, coming to witness the birth of a new party led by President Laurent Gbagbo reinforces the existing democratic vitality and it will help with the advancement of democracy," he said.

Notably absent, though, was the former first lady, Simone Gbagbo, who had traveled to Congo. Charles Ble Goude, Gbagbo's former youth leader who also was acquitted at the ICC, also did not attend.

Laurent Gbagbo spent eight years awaiting trial on war crimes charges. A judge acquitted him in 2019, saying prosecutors failed to prove their case. The verdict was appealed but upheld in late March, clearing the way for Gbagbo to leave Belgium, where he had spent the past two years.

While some had feared his return could set off new unrest, Gbagbo was received by Ouattara himself and has mostly maintained a low profile. Some of Gbagbo's opponents, though, maintain he should have been jailed in Ivory Coast upon his return and not given a statesman's welcome.