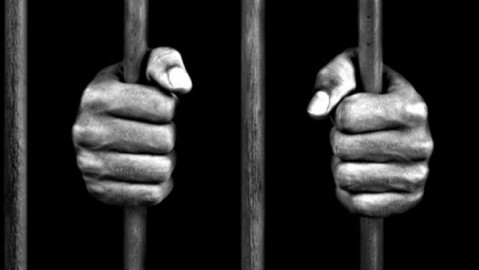 File photo of a person behind bars.

Four police officers and a bar owner were arrested on Friday for their alleged involvement in the murder of a man in Kakamega in December 2019.

According to a charge sheet seen by Citizen Digital, the incident occurred on the night of December 16, 2019, when Rosana alerted the Kakamega-based officers of one Raymond Lubango, who was allegedly causing a commotion at his entertainment joint.

The officers proceeded to the bar where they apprehended Lubango and placed him in the back of a police land cruiser after he was positively identified by Rosana.

As the five made their way to Kakamega police station, Lubango is alleged  by the officers to have overpowered them before jumping out of the moving vehicle, sustaining serious head injuries in the process. He was rushed to Kakamega Referral Hospital where he succumbed to his injuries.

Following the incident, an inquest file was opened and forwarded to the Office of the Director of Public Prosecutions (ODPP) which recommended that it be taken to Court for a public probe.

The five suspects were arrested after a Kakamega Court, which doubted the claims made by the officers, on Friday found them culpable of Lubango’s murder. A post-mortem report also showed that Lubango sustained multiple internal head injuries and a burst testicle, with the pathologist indicating it was highly unlikely that the deceased sustained the injuries from jumping out of the vehicle.