Forwards Paul Were, Rupia train with Police FC as they angle for deals 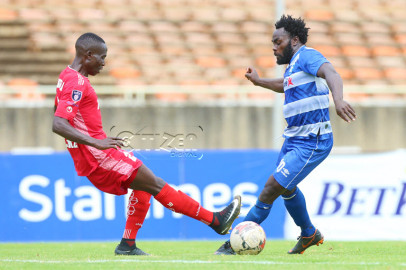 Rupia had signed for Saudi Arabian side Bisha FC in August while Were was playing for Greek Football League club Egaleo.

Former AFC Leopards striker Paul Were and Elvis Rupia are training with Police FC after leaving their respective clubs in Europe.

Rupia had signed for Saudi Arabian side Bisha FC in August while Were was playing for Greek Football League club Egaleo.

Police team manager George Maelo has confirmed the two are training with them and will soon make a decision on the possibility of signing them.

“They have been training with us the last two days and they are improving each day in training and we have given them one week to continue practising with us and if they satisfy the technical bench we will definitely reward them with a contract,” said Maelo

The team manager added that discipline on and off the pitch will be a key factor when deciding on whom to sign, insisting on the importance of protecting the disciplined forces image.

“As disciplined forces we are entitled to lead by example with good morals in the society and the behavior  on and off pitch will determine a lot whether one will be given a contract so that is very key when joining our team ,”added Maelo.

With the second leg already on, the former Sofapaka captain shared vital lessons the team has learned and is looking forward to a strong finish at the end of the season.

“The Premier League is not the same as the National Super League.  A team has to take the chances they create and at the same time maintain defensive discipline. Heading to the second leg these are areas we need to improve on for us to finish strongly,” the team manager told Citizen Digital.

Having played to a 2-2 draw on Sunday against Ulinzi Stars, the newly promoted side are ninth in the league standings with 21 points from 16 games and will face Kariobangi Sharks on 12th February in their next fixture.