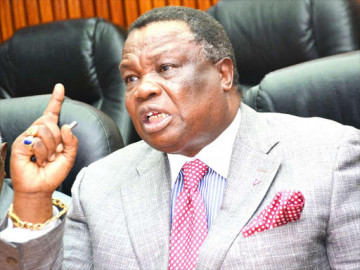 Senator Cleophas Malala has been chastised by the Central Organization of Trade Unions (COTU) Secretary General Francis Atwoli for claiming that he will not allow the Luhya political meeting to take place on December 31st at the Bukhungu stadium in Kakamega County.

Speaking while carrying out an inspection at the stadium, Atwoli said that Malala should 'slow down' and show some respect arguing that was it not for him, Malala wouldn't have been elected as senator.

"Huyu kijana wetu who I personally made him a senator, tell him to stop being erratic. I am the one who gave him that seat. Na mtu akikupa kiti anaweza kukunyang'anya. Let him know that aende polepole, bado ni kijana mdogo. We know who has funded him to bring these problems," said Atwoli.

Mr.Atwoli further stated that the venue is ready and set for use adding that there will be beefed up security to ensure safety for Kenyans.

"I have gone out of my way to ensure that the security that will be there on the 31st is security that no man or woman has ever seen," he said.

Accompanying Mr.Atwoli was Kakamega Governor Wycliff Oparanya who said that the stadium doors shall be open to all Kenyans and is not fully targeting the Luhya community.

He says that they have invited ODM leader Raila Odinga who will be expected to adress what he has in store for the Luhya nation should he clinch the presidential seat in 2022.

"Leo ilikua kudhibitisha vile mipango inaendelea. And I want to invite all Kenyans coming from the Western region to come and witness how the meeting will go down. This meeting is for everyone not just for the ODM party," said Oparanya

"We want on that day we fully acknowledge Raila as the number one Presidential candidate. And we have invited him here on that day, and he will be saying what he will do for the Luhya community if he becomes the fifth president of the nation."

Kakamega Women Rep Elisi Muhanda said that the event will be an opportune time for the Luhya people to unite and clinch most seats in parliament. She further commended Leaders Atwoli and Oparanya for planning the event citing it to aid in unity.

"Waluhya wenzangu nawasihi tukue kitu kimoja na tuwe na umoja. And we are saying that when we come together we shall for sure get into government. And I'd want to thank Francis Atwoli and Wycliffe Oparanya for arranging this great event that will have many Kenyans coming from all sectors of the region," she said.