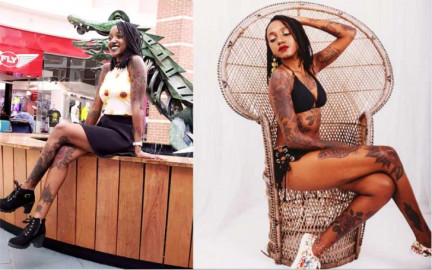 Wakenya Njoki, a Florida-based artist formerly known as the 'Kenyan hippie,' now claims that nature provides her with healing and inspiration.

After previously converting from Christianity to Islam, the singer, who is also an activist, entrepreneur, and tattoo model, now identifies as a neo-pagan.

She previously converted from Christianity to Islam because she believes the world of religion is tainted by judgment and confusion.

Wakenya told the Standard that she became a neo-pagan after watching "The Secret Law of Attraction," a documentary that features a series of interviews with scientists and philosophers who offer advice on how to live a happy and successful life.

Wakenya's American fiancé, Scott, has been supportive, understanding her right to worship despite being a Christian.

“My fiancé is Christian and supportive. We understand each other and have no problem with the other’s choice of religion. He understands my stand and my freedom of worship,”

Wakenya believes her over sixty body ink tattoos bring her happiness and contentment because she is a free thinker.

‘’I have over sixty tatoos, …my mom’s favourite verse which is psalm 23 on my arm, one of my cousins poems on my other arm, some have meaning but most I just got because I loved them,”

“Right now I am finishing inking my arms and back. Then I move back to the legs. Some people judge me while others compliment me on Tiktok where I show most of my body art. At the end of the day I feel bada**. This is my life,” said Wakenya.

She has also found a niche market in the United States as a black tattooed model, and has been approached by several magazines to appear on their covers.

Wakenya, on the other hand, claims that she hasn't fully grasped the market yet because she isn't being paid well enough.

“I did a photoshoot to celebrate myself after my fist separation, I submitted them to a tattoo magazine, a renowned photographer in New York, and they loved it and run me on three pages…and I realized maybe there is a market here because how many tattooed black models do you see out here…” said Wakenya during an interview with KBC three weeks ago.

The musician, who moved to the United States in 2013 and obtained dual citizenship in 2019, is currently working on her album, which she claims will have an international flavor.

“My American audience has embraced kikuyu very much, I teach my African roots and I’m very proud of it,..it’s going to be interesting to see how my music does in Kenya,” said Wakenya.

Wakenya is also a social activist who has faced backlash from her family and friends after criticizing the Black Lives Matter movement.

“As I challenged their perspective on BLM, they called me an outcast and threatened to revoke my black card. The called me out for being in an interracial relationship. That is when I discovered that there is oppression and racism among blacks,”

Wakenya held her traditional wedding to her American fiancé, Scott on December 25, 2021.