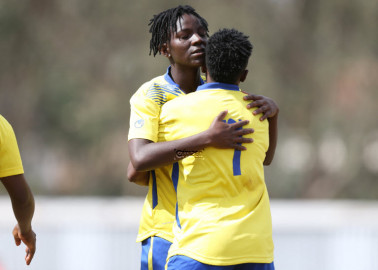 Vihiga Queens tactician Boniface Nyamunyamuh has rued their profligacy in front of goal for their barren draw against Gaspo Women in the Kenyan Women Premier League (KWPL) encounter on Sunday at the Mumias Sports Complex.

The draw left the western Kenya-based side at the summit of the log with 16 points after six rounds of matches while Gaspo and Trans Nzoia Falcons are second and third consecutively with 13 points.

Speaking to Citizen Digital, Nyamunyamuh termed the outcome as a necessary wake-up call if they are to defend their crown.

“It was a tough match but my players wasted a lot of chances, that's why we settled for a draw.

“A lot of chances emerged in the second half and my strikers at some point were left with the opponent keeper but failed to score.

“That’s what I am working on this week in the training as we switch our focus to the next match.

The defending champions take on Zetech on Saturday in a match the seasoned tactician expects their improvement to be on full display.

“Our aim remains the same that we must win the title this season, something which I am sure we shall achieve.” Said Nyamunyamuh.

At the ASK Showground in Kitale, Trans Nzoia Falcons and Nakuru City Queens settled for a barren draw while Kangemi Ladies were on the receiving end of a 4-3 thrashing in the hands of Zetech Sparks at Ligi Ndogo grounds in Nairobi.