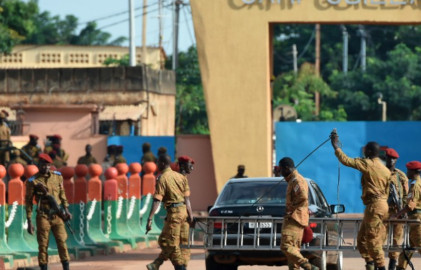 Eight soldiers in Burkina Faso were arrested on Tuesday on suspicion of conspiring against the government, the military prosecutor's office said.

One of the alleged plotters tipped off the authorities on Saturday to an alleged "plan to destabilize the institutions of the republic", the prosecutor's office said in a statement.

An investigation is under way and the soldiers have been questioned, it said.

Governments in West and Central Africa are on high alert for coups after successful putsches over the past 18 months in Mali and Guinea. The military also took over in Chad last year after president Idriss Deby died on the battlefield.

Neighboring governments have imposed heavy sanctions on the military rulers in Guinea and Mali in an effort to head off any contagion effect in a region once known as Africa's "coup belt".

The Burkinabe government at the time suspended mobile internet service for over a week, and the tense situation led the United Nations' special envoy to West Africa to warn against any military takeover.