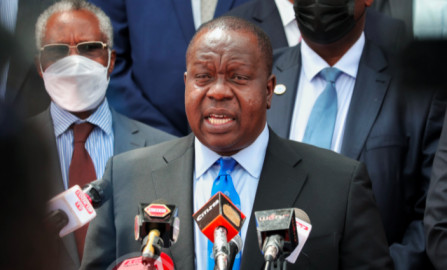 The Government is blaming the scramble for campaign cash and politicians failure to honour promises for chaos and violence witnessed in political rallies.

“What is frustrating us is the behaviour of some of our political leaders. The endemic false promising that is happening around the country, the incredible amount of bribing that is going on, ferrying groups of young people and bribing them in the process,” the CS said.

He was speaking after a meeting on security preparedness for the general elections at the Kenya Institute of Curriculum Development in Nairobi. The CS said four major security incidents have been reported from last December and all have been dealt with, including some cases which are now in court.

He urged politicians and political parties to shoulder individual and collective responsibility to ensure polity and peaceful campaigns.

“It’s not the job of police officers to mediate bribery contracts or follow up false promises made by politicians. It’s upon political leaders to conduct themselves decently and manage their affairs effectively. We have an equal responsibility to ensure that our country goes forward. We must be able to contain ourselves as a people and as leaders,” he said.

He asked security sectors to document all incidences of political violence in the country to guide mitigation and response actions ahead of this year’s general elections. The government has begun increasing the presence of intelligence operatives in campaign rallies to monitor inciteful utterances and conduct to ensure perpetrators are brought to book.

“We are going to be more present in public meetings and in campaign rallies. We will have more officers from the NCIC and DCI embedded in some of these political activities to detect crime and document the evidence that we need to support prosecution,” he said.

The CS also announced that they are working on modalities of fine-tuning inter-agency collaboration and support the involved independent offices to deliver on their mandates during this electioneering year.