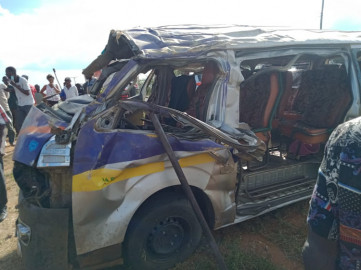 Two people have died and four others left injured in a grisly road accident along the Wote-Makindu road, Makueni County.

The 12 noon accident involved a 14-seater matatu that was heading towards Makindu and a Toyota Hilux pick-up which was headed towards Wote town.

According to a police report, the pick-up driver lost control after the bonnet of his vehicle lifted up – blocking the driver’s view. The pick-up then rammed the 14-seater Matatu that was oncoming.

The driver of the pick-up died on the spot according to the police report.

Part of the police report read: "Today at about 1220hrs, along Wote Makindu road at Sinai area, scene visited and it was established that a motor vehicle driven by Job Mwendo (30yrs) who died on the spot from Makindu general direction and upon reaching the location of the accident, bonnet of the said vehicle opened up and the vehicle lost control. The driver of the 14-seater matatu belonging to Maptro Sacco also succumbed to injuries while being rushed to hospital.

According to an eyewitness, the pick-up was speeding when the bonnet suddenly lifted.

"After the bonnet opened, the driver started swaying on the road before colliding with the on coming vehicle," the witness narrated.

Dr.Joseph Masila, Makueni referral hospital Medical Superintendent said: "We have received four patients, three male and one female, they are all out of danger. I am told the two drivers died, one patient is set for stitching and rest are set for CT scans.”

Napeiyan also confirmed that the bodies of the deceased were taken to Makueni hospital mortuary.