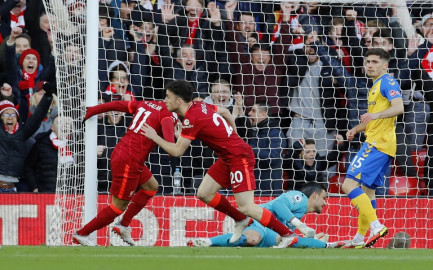 Jota scored the fastest Premier League goal this season when he found the net after 97 seconds and added another in the first half as Liverpool moved up to second place in the Premier League standings.

The 24-year-old has scored 21 goals in 46 appearances for Liverpool since joining them from fellow Premier League club Wolverhampton Wanderers in September 2020.

"Diogo, exceptional player, exceptional boy," Klopp told reporters on Saturday. "It was for us... a perfect signing because he has everything that a Liverpool player in this squad needs.

"He has the technical skills, the physical skills, and he is very smart and can learn all the tactical stuff pretty quick."

The versatile Jota was out for three months last season due to a knee injury but has still impressed Klopp with his performance so far.

"He has the speed, the desire to finish situations off really good," Klopp said. "I think his goal-scoring record is pretty impressive if I'm right.

"Unfortunately, he had a big injury last year and that is then never helpful. But he is back, thank God, and fits really well in this team. I'm really happy for him."

Liverpool next play away to Merseyside rivals Everton on Wednesday.