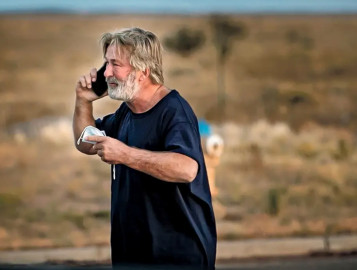 Alec Baldwin has made his first public statement since a fatal shooting on the set of his new film on Thursday.

"There are no words to convey my shock and sadness regarding the tragic accident that took the life of Halyna Hutchins, a wife, mother and deeply admired colleague of ours," Baldwin tweeted on Friday. "I'm fully cooperating with the police investigation to address how this tragedy occurred and I am in touch with her husband, offering my support to him and his family. My heart is broken for her husband, their son, and all who knew and loved Halyna."

The actor was in New Mexico filming "Rust," which he's starring in and producing. Baldwin discharged a prop firearm on the set that resulted in the death of Halyna Hutchins, 42, the film's director of photography, according to investigators.

Affidavit: Baldwin handed what was said to be 'cold gun'

A search warrant issued by the Santa Fe County Sheriff's Office and obtained by CNN affiliate KOAT revealed that Baldwin was handed one of three prop guns by assistant director David Halls that were set up in a cart by an armorer.

Halls handed the gun to Baldwin and yelled "cold gun," meaning the gun did not have live rounds, the affidavit states.

The gun fired by Baldwin hit Hutchins in the chest and wounded Souza, who was behind her while rehearsing a scene, in the shoulder. She was pronounced dead at a hospital after being transported by helicopter.

The investigator says in the affidavit that the assistant director did not know the gun had live rounds when he handed the gun to Baldwin.

The affidavit asked to seize all firearms and ammunition, cameras and computer equipment and the clothes worn by the actors at the time of the shooting.

According to the Los Angeles Times and other media outlets, several crew members quit the production due to concerns over conditions and safety issues -- including gun safety procedures -- and Covid protocols not being followed before the shooting.

"The safety of our cast and crew is the top priority of Rust Productions and everyone associated with the company," Rust Movie Productions said in a statement obtained by Deadline. "Though we were not made aware of any official complaints concerning weapon or prop safety on set, we will be conducting an internal review of our procedures while production is shut down. We will continue to cooperate with the Santa Fe authorities in their investigation and offer mental health services to the cast and crew during this tragic time."

CNN has made multiple attempts to reach Rust Movie Productions for comment.

The Santa Fe County Sheriff's Office said the investigation "remains open and active" and no charges have been filed.

911 caller: 'We were rehearsing and it went off'

In a 911 call obtained by KOAT, a crew member explains to the operator that help is needed for two people that had been "accidentally" shot on set at the Bonanza Creek Ranch.

"We need some help a director and a camera woman have been shot," a woman tells the 911 operator.

The woman also explains what had occurred before the prop firearm went off.

"I was sitting, we were rehearsing and it went off, and I ran out, we all ran out," the woman told the emergency operator.

Authorities will be carefully combing the property where the movie was being filmed this weekend.

Deputies are maintaining a security perimeter around the scene of the shooting, Ríos said later.

There were no deputies on set at the time of the shooting, but the sheriff's office was aware the production was using prop guns, he added.

The New Mexico Occupational Health and Safety Bureau announced it is also investigating the shooting.

Production accidents, despite safety measures, have happened before. While filming the movie "The Crow" in 1993, actor Brandon Lee, the son of Bruce Lee, was killed in a prop gun shooting accident.

Even blank ammunition can be deadly if fired at close range. In 1984, actor John-Eric Hexum was playing around with a gun on the set of "Cover Up: Golden Opportunity" and died after putting the gun to his head and pulling the trigger.