U.S government bans China Telecom from operating in the country 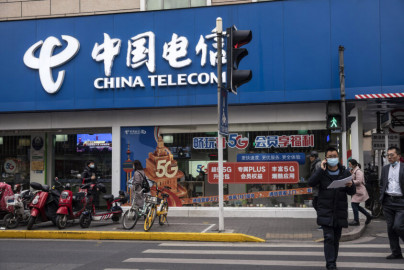 Washington is barring a major Chinese state-owned telecommunications firm from operating in the United States over national security concerns — an action that threatens to once again increase tensions between the world's two largest economies.

The US Federal Communications Commission on Tuesday said it has ordered China Telecom to discontinue US services within 60 days, citing findings that the company's American subsidiary "is subject to exploitation, influence, and control by the Chinese government."

The company is also "highly likely to be forced to comply with Chinese government requests without sufficient legal procedures subject to independent judicial oversight."

China Telecom did not immediately respond to requests for comment from CNN Business. A spokesperson for the American subsidiary told Reuters that the FCC's decision was "disappointing."

"We plan to pursue all available options while continuing to serve our customers," the spokesperson said.

The company's main business is in China. It says it has roughly 370 million mobile customers.

China Telecom does not break out its customers by region. Its American subsidiary was incorporated in 2002, and the firm says it provides services to businesses and carriers between the Americas and China.

This isn't the first time China Telecom has been targeted with punitive actions by the United States.

In January, the New York Stock Exchange said it would delist three Chinese telecom stocks — including China Telecom — to comply with an executive order signed by then-President Donald Trump. The order banned Americans from investing in firms that the US government suspects are either owned or controlled by the Chinese military.

China Telecom has since ceased trading in the United States. Shares listed in Hong Kong slumped 0.7% on Wednesday.

Huawei has long said it is a private firm that operates independently of the Chinese government, but the United States has accused the company of presenting a threat to national security.

While President Joe Biden has struck a different tone with Beijing than his brash and outspoken predecessor, relations between United States and China have not improved significantly.

In fact, tensions were recently inflamed after Biden said that the United States was committed to coming to Taiwan's defense if the self-governing island was under attack from China. The remarks appeared to contrast with America's stated policy of "strategic ambiguity" toward Taiwan, though the White House asserted that there was no change in policy.

China's foreign ministry, though, warned hours after the remarks that the United States should not send "any wrong signals to the separatist forces of Taiwan independence." While the Chinese Communist Party has never ruled Taiwan, Beijing considers the island to be an "inseparable part" of its territory and has repeatedly threatened to use force if necessary to prevent the island from formally declaring independence.