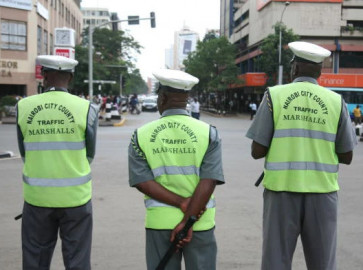 Nairobi County has announced that it is in the process of recruiting 500 more inspectorate officers as part of efforts to improve service delivery.

According to the county government, there is currently a shortage of staff in the security and compliance department, which is struggling with aging staff.

“A total of 500 new officers will be recruited in the next financial year as the county looks at having the required workforce aimed at improved service delivery and prompt response,” reads the Nairobi County Annual Development Plan for the financial year ending June 30, 2023.

The county government further says it has made advertisement for the positions, and will outsource services from other agencies.

The project will set the county back Ksh.180 million.

The kanjos have previously come under fire for accusations of violence, arbitrary arrests, harassment, and extortion of hawkers in the city, the latest being a man who was allegedly hit with a metal rod while handcuffed, losing a tooth.

“We intend to build capacity of our staff through rolling out training programmes as well as ensure proper succession plan. We intend to rebrand and get rid of the culture associated with corruption and brutality, especially when dealing with hawkers,” said Director of Enforcement Services Dr. Mark Leleruk.