Musa lauds gov't for lifting ban on fans at stadiums 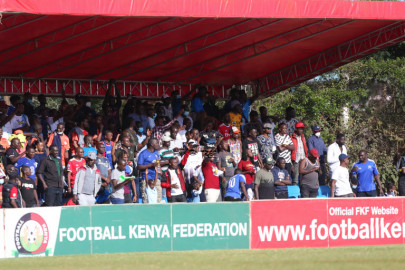 Last week, the government through the Ministry of Health announced it would permit fans to return to stadiums up to a capacity of two thirds

Former Gor Mahia FC captain Musa Mohammed has lauded the government for its decision to allow fans back to the stadium saying it will uplift the mood of the game across the country.

Last week, the government through the Ministry of Health announced it would permit fans to return to stadiums up to a capacity of two thirds and Musa says it will bring more excitement during matches

“During my days with Gor the fans really mattered because they push you to do your best and they also shore up the finances of the clubs,” Musa said.

Musa added he was excited by the project that is going on with Police FC who have shown great ambition with their recruitment since earning promotion to the FKF Premier League.

“The team has done well in the transfer market and I’m pleased to see the direction the team is taking. They want to win titles so our role as experienced players is to mentor the younger ones,” he added.

“It’s always good to get the first win because it gives you confidence to play the next match.”

The newly promoted side will face KCB on Saturday in their next league fixture.