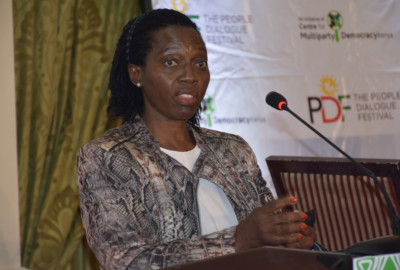 A section of leaders from Central Province, under the umbrella Mount Kenya Unity Forum, have agreed on four priority areas in which they engage those seeking support from the region.

The leaders, representing various political parties from the region, who met in Naivasha on Monday, listed shared positions in appointive positions, equity in resource sharing as some of irreducible minimum to be met by those seeking votes from their community.

The vote rich Mt. Kenya region remains a center of interest for individuals seeking to take over from President Uhuru Kenyatta when he leaves office next year.

And with sharp divisions having caused a tectonic shift in the mountain, a section of leaders under the umbrella of the Mount Kenya Unity Forum converged to chart the way forward for the region as jostling ahead of the next elections picks up pace.

“We have chosen Martha Karua to be our official convener and our spokesperson,” said Gatundu South MP Moses Kuria.

The forum comprising political leaders from different regions resolved to champion for the equitable sharing of the national cake saying the region’s votes should stand to be counted.

During the Building Bridges Initiative (BBI) campaigns, Central Kenya leaders rallied behind the ‘one man, one vote, one shilling’ mantra that rode on population as the index for sharing resources.

The Service Party (TSP) leader Mwangi Kiunjuri stated, “Nobody should stop any community of interest to come together, sit together, eat together, and articulate their issues.”

Sources however intimate that the meeting was a tactical strategy to increase the region’s stakes in catching the eye of a worthy suitor.

Already, Gatundu South MP Moses Kuria has proposed that Central Kenya only support a presidential candidate who will guarantee them the running mate position together with at least 40 per cent of the available positions in government ministries and departments and State agencies.

“This is beyond the presidential race, it’s about permanent community of interest and permanent issues that need to addressed, not just for purposes of 2022,” said Karua.

Former Kiambu Governor William Kabogo said: “This is not only for this generation, it’s for generations to come, the interests of the mountain are paramount to ourselves as we think as Kenyans.”

And in what appeared to be an indirect attack at Deputy President William Ruto’s United Democratic Alliance (UDA) party that seeks to have all those supporting his State House bid join its fold, the forum said the proposal would stifle democracy.

“For a long time, we fought the one party dictatorship to bring back plural politics in Kenya. That is something we’re committed to safeguard. We have seen in the history of our country that monolithic parties become oppressive,” added Karua.

The forum is set to draft a blue print that will be shared with  various like-minded parties and presidential hopefuls as alliances begin to form ahead of the next polls.