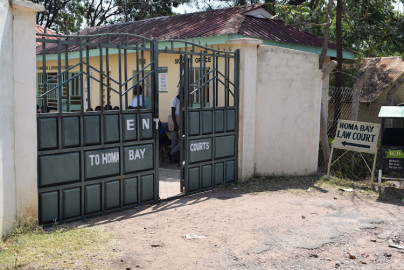 A man accused of killing his 70-year-old grandmother in Ruga A village in Homa Bay, Kisumu County has been arraigned.

Steven Omondi Chwanya, 24, is accused of hacking his grandmother Priscah Olumbe to death on Tuesday using an axe, together with her five goats and three cows.

Appearing before a Homa Bay court on Thursday,  police asked the court to grant them 14 more days to detain Chwanya pending conclusion of investigations.

The court ordered that the suspect be subjected to a mental examination before returning to court to take a plea on December 15.

Investigating officers presented health records before Principal Magistrate Joy Wasonga indicating that the accused had been suffering from a mental problem caused by an epilepsy condition.

However, the magistrate ordered that Chwanya be subjected to a fresh psychiatric test.

The Office of the Directorate of Public Protection (ODPP) has lined up at least two witnesses in the case, including Arujo Location Chief Bob Lang’o.

Chwanya was arrested on Tuesday morning while going to surrender himself to Homa Bay police station, carrying a blood-stained axe and a machete he claimed he used to murder his grandmother.