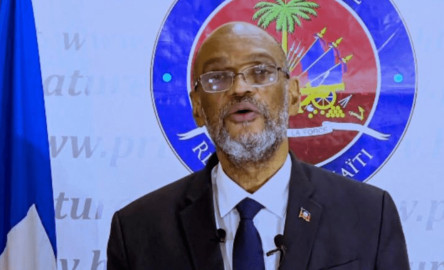 The tens of thousands of people sheltering in the shadow of Texas's Del Rio bridge have gone, but their trials continue. And they will not be the last, as Haiti's Prime Minister Ariel Henry warned on Saturday.

Some have been expelled to Haiti by force, others convinced to cross the border back to Mexico. A number remain in limbo in the US -- luckier than most, because they will have the chance to make their case before an American immigration judge.

Addressing the border crisis before the UN General Assembly on Saturday, Henry pointedly reminded the world that "many countries which are prosperous today have been built through successive waves of migrants and refugees."

Global inequality is the fundamental driver of such crises, he also said. "The problem of migrants must remind us that human beings, fathers and mothers, will always flee misery and conflict and strive to offer better living conditions to their children," he said.

"Migrations will continue as long as there are pockets of wealth on the planet, while the majority of the world population lives in precarity."

For many Haitian migrants, this past week was only one more hardship in a series that had begun months and even years ago. Some of those who made their way to Del Rio had originally fled Haiti after the catastrophic 2010 earthquake, and worked in South America for years, supporting families back home with their earnings.

But racism, tightening immigration laws and the economic fallout of the pandemic have forced Haitians in countries like Chile and Brazil to look for something new, say migrants and advocacy groups. Those pressures have not gone away, which raises the prospect of future crushes of migrants at the US border.

"Haitian migration has been roaming Latin America for more than a decade," said the interior ministry of Chile in a statement to CNN. "In Chile, their exodus is increasingly notorious, given the current working conditions that do not favor their insertion in the market, even with a visa and work permit."

Djimy Delice, a Haitian migrant activist who lives in Valparaiso, Chile, says the recent passage of a new immigration law has made it difficult for undocumented migrants to regularize their status, and to access education, housing and health services. "What we know is that if (migrants) have a very uncertain journey (to reach the US), nothing here is certain either," he said.

In Brazil, another common origin country for Haitian migrants, Gilbert Lafortune says he is still contemplating heading for the US.

The 49-year-old father, who lives in Sao Paulo, says soaring inflation has made everyday survival impossible for those who are also supporting families back home in Haiti.

"With the rising inflation, the cost of everything has gone up: light, gas, water, food ...The minimum wage in Brazil is 1,100 reais (a little more than $200), so you can't pay rent, food and also help your family," he said. "Therefore, a lot of people need to leave and go to the US."

"As of this morning there are no longer any migrants in the camp underneath the Del Rio bridge," US Secretary of Homeland Security Alejandro Mayorkas announced Friday -- a logistical feat, but one that raised concerns in NGO and advocacy circles over how humane the processing of nearly 30,000 people in so short a time could have been.

UN High Commissioner for Refugees Filippo Grandi earlier this week slammed the expulsion of some migrants under Title 42, a Trump-era policy that allows border officials to quickly expel migrants as a pandemic public health precaution. The policy was ruled illegal by a judge but remains in effect until the end of the month.

"The summary, mass expulsions of individuals currently under way under the Title 42 authority, without screening for protection needs, is inconsistent with international norms and may constitute refoulement," Grandi said, referencing a principle in international law that forbids returning migrants to countries where they would face irreparable harm.

Haiti is wracked with an epidemic of violent crime, political turmoil and devastation from a recent earthquake. Large swathes of its capital city, Port-au-Prince, are controlled by gangs, who operate sprawling kidnapping-for-profit operations.

More than 2,580 Haitians -- including 563 children -- had been sent back to Haiti as of Friday, according to the International Organization for Migration. The agency, alongside the Haitian government, is scrambling to receive all the people being dropped off by US planes.

But it is unclear whether local officials and humanitarian workers are equipped to deal with complicated individual cases, given the scale and speed of the expulsions. The IOM and the UN point to UNHCR as the agency responsible for any refugee claims among the deported, but the refugee agency on Friday told CNN its presence in Haiti is "very limited."

Meanwhile, Haitians who eventually crossed back into Mexico -- an estimated 8,000, according to Mayorkas -- also face an uncertain future. In the southern town of Tapachula, where many migrants have been sent, Haitian women describe xenophobia and discrimination, said Gretchen Kuhner, director of Mexico's Institute for Women in Migration. "People don't stop for them to cross the street, even if they're carrying a baby or even if they're pregnant," she said.

Haiti Foreign Minister Claude Joseph traveled to New York on Thursday, meeting with US State Department officials ahead of his country's appearance at the UN General Assembly.

At the top of the agenda was recent footage of American Border Patrol officers on horseback raising whips toward migrants earlier this week, Joseph said. "Shocking images. We expressed our concerns about the mistreatment of Haitians, Haitian migrants."

"They deserve better treatment and we are very appreciative to the American people who have spoken up," he also said.

Mayorkas on Friday told press that he recognized the images "painfully conjured up the worst elements of our nation's ongoing battle against systemic racism" and insisted that they "do not reflect who we are." The officers involved are no longer with migrants and an investigation into the incident is ongoing, he also said.

Haitian officials were negotiating with the US about the migration crisis "on a daily basis," according to Joseph. He sees it as a diplomatic victory that some Haitians have been allowed to remain in the US and be heard by an immigration judge. Approximately 12,400 are expected to get a chance to appear in immigration court.

But some of those who are already back in Haiti are furious with their leaders, whom they say failed to stand up to Washington and should not have accepted the deportations.

"All other countries humiliate us as Haitians. We have no respect; we have no value," deportee Eddy Teverme told CNN upon arriving at Port-au-Prince airport this week.

"They told us to accept the reality and board the plane. They said life does not end when you return to your country," he said. "But the only question I need to ask my leaders, the official who signed the deportation agreement, do they have jobs for all these Haitians who have been sent back to the country?"