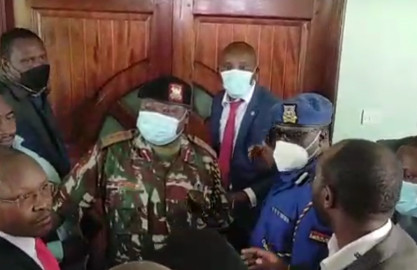 There was a stand-off at the Nyandarua County Assembly on Tuesday as leadership wrangles pitting embattled Speaker Ndegwa Wahome and MCAs opposed to his leadership played out.

The speaker arrived at the House shortly before 9am ready to resume his duties following a period where he was ousted before moving to court to challenge the process citing lack of legality.

Ndegwa, who was accompanied by a section of MCAs allied to him; among them Kamau Gathungu (Leshau ward), Kieru Wambui (Gatimu), and Kariuki Maguna (Murungaru), however found the doors locked.

Their efforts to gain access despite heavy presence of security officers were unsuccessful as members opposed to him led by Leader of Majority Wambugu King’ori stood their ground saying they would not allow a “stranger” to preside over the business of the day.

The Wambugu-led group had previously instituted an impeachment motion against Speaker Wahome, but he moved to court.

Nakuru High Court Judge Hillary Chemitei on Monday instructed that the speaker be allowed back to resume his duties, and that his official vehicle and mace be returned.

In his ruling, the judge further ordered that Leader of Majority Wambugu King’ori, deputy speaker Zachary Njeru, and clerk Elizabeth Muthui pay a fine of Ksh.400,000 each or serve a jail term of two months after they were found guilty of contempt of court.

However, when he reported to the Assembly, Speaker Wahome could not gain access to the chambers, in what he termed as “blatant disregard to the rule of law.”

He accused Governor Francis Kimemia of perpetuating the stand-off  for his own interest, despite a rival section of MCAs saying the matter was them and the Wahome, thereby exonerating the governor.

As the speaker and members of staff remained stranded outside the assembly, the other section of MCAs were in the chambers ready to transact the business of the day in a session led by First Chair of the Speakers panel Wanjiku Muhoho.

However, due to the prevailing stand-off outside the chambers, the session was adjourned till October 12, next week.

There was a moment of drama as police officer engaged in running battles with  a group of youths believed to have been hired to disrupt the days activities.