Bayern supports vaccination but not mandatory, amid Kimmich furore 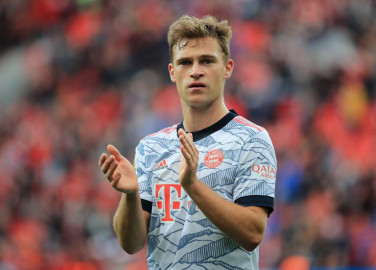 German champions Bayern Munich support the vaccination of its players to protect against COVID-19 but it is not mandatory, the club said amid a furore caused by player Joshua Kimmich's announcement he was not vaccinated.

The Germany international had said on Saturday he was not vaccinated because of concerns he had over long-term effects of the vaccine. He said he might do it in the future.

This triggered an instant storm of criticism across Germany, with many arguing football players needed to be role models.

The German Football League (DFL) on Tuesday said more than 90% of players and staff in the top two German divisions had been vaccinated.

"It is important to say that we can only advise everyone to get vaccinated," Bayern CEO Oliver Kahn told reporters on Monday evening. "We have highlighted that through a number of actions."

"At the end of the day one has to respect that others can have a different opinion."

Critics have said Kimmich's position on vaccination also went against his actions of co-founding the #Wekickcorona organisation that financially supports charities and welfare organisations during the pandemic.

"Bayern supports vaccination actions in a sustainable way," said Bayern president Herbert Hainer. "But at the end of the day there is no vaccination obligation with us. It is an individual decision.

"Joshua Kimmich did say after all that maybe he would be vaccinated in the future. I would be happy if that happened," Hainer added.

The 26-year-old player also got the backing of former Bayern CEO Karl-Heinz Rummenigge who said the player would eventually take the "right decision."

"If there is one player I know who is extremely responsible and a role model in many things in life then this has always been Joshua," said Rummenigge, who stepped down earlier this year to be succeeded by Kahn.

"In this case I think he will at some point take the right decision."