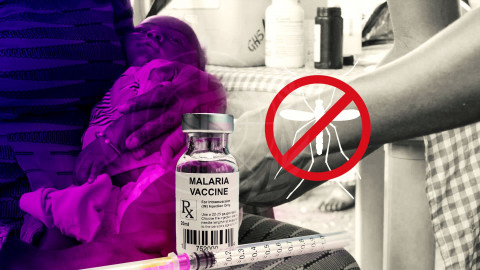 In a historical moment on Wednesday, the World Health Organization (WHO) said the Malaria vaccine should be rolled out across Sub-Saharan Africa and other regions with moderate to high malaria transmission after pilot immunisation programs in Ghana, Kenya, and Malawi were successful.

Closer home, Dr. Bernhards Ogutu, the Chief researcher at KEMRI says the vaccine is a positive step in Africa’s journey of eradicating Malaria, a scourge that killed an estimated one million people- mostly children under age 5- between 2018 and 2019.

“We thought we would have the deployment in 2015 when the European drug agency approved the first parasitic malaria vaccines the -RTS,S- for humans,” Dr. Ogutu told JKlive on Wednesday.

“There was need to do a pilot to make sure everything was right and this has come to light this day andI I think this has a lot of meaning to the African child,”

According to Dr Ogutu, the RTS,S vaccine may be Africa’s journey towards malaria elimination when combined with other measures.

Now, according to Dr Ogutu, the next step for the RTS,S is  now for the global scientific community and multilateral agencies such as the WHO to put in force the procurement and deployment to the areas where it is much needed.

On the issue of the affordability of the vaccines, especially in Africa, where counties may struggle with funding, Dr Ogutu said the vaccine development was supported by several foundations and multi-lateral agencies and therefore comes highly subsidised.

The World Health Organization (WHO) said on Wednesday the only approved vaccine against malaria should be widely given to African children, potentially marking a major advance against a disease that kills hundreds of thousands of people annually.

The WHO recommendation is for RTS,S – or Mosquirix – a vaccine developed by British drugmaker GlaxoSmithKline.

Since 2019, 2.3 million doses of Mosquirix have been administered to infants in Ghana, Kenya and Malawi in a large-scale pilot programme coordinated by the WHO. The majority of those whom the disease kills are aged under five.

That programme followed a decade of clinical trials in seven African countries.

“This is a vaccine developed in Africa by African scientists and we’re very proud,” said WHO director-general Tedros Adhanom Ghebreyesus. “This vaccine is a gift to the world but its value will be felt most in Africa.”

The WHO says 94% of malaria cases and deaths occur in Africa, a continent of 1.3 billion people. The preventable disease is caused by parasites transmitted to people by the bites of infected mosquitoes; symptoms include fever, vomiting and fatigue.