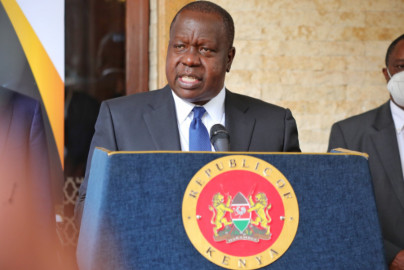 The government has ordered all non-residents within Laikipia County's security operation area to leave as part of efforts to enforce peace and stability in the region.

The government, in a statement released on Tuesday by Interior Cabinet Secretary Dr. Fred Matiang’i, said an immediate enhancement of the ongoing security operation will be undertaken in the affected area.

CS Matiang’i also said additional special forces and equipment under the heightened command will be deployed to the operation.

“The government notes with grave concern that despite its efforts to enforce peace and stability in Laikipia, hardcore bandits continue to take advantage of the prevailing drought situation in neighbouring counties to commit criminal incursions,” stated the CS.

“Unfortunately, innocent lives have been lost and many others injured in attacks that have also occasioned the destruction of private property and loss of livestock.”

He added: “Despite the enhanced presence of security teams, criminals are still trying to challenge the Government's resolve to restore normalcy and the economic livelihoods of the residents of Laikipia. This will not be tolerated.”

Further, CS Matiang’i noted, a special command team to monitor and continuously review the operation to rid the area of criminal elements has been put in place.