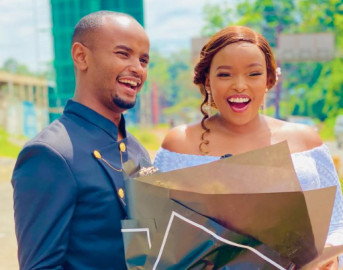 The couple announced the news on YouTube channel on Tuesday in a thirty-minute long video titled ‘Big Surprise.’

“The number one surprise is that we wanted to let you know that we are pregnant, we are expecting our second baby, I just thank God because it’s been amazing, He’s taken really good care of us as the WaJesus family,” said Kabi.

In the last minutes of the video, Kabi unveiled a two-part surprise to his wife Milly; with the first being a huge billboard with the inscription ‘The WaJesus Family is growing’ on it, but the second one yet to be unveiled.

However, in the video, a white Range Rover with a ribbon could be seen behind them, hinting that it could be the second surprise.

“I thought, which other way can I use to make sure that we announce this to the world in the biggest way possible, and I thought a billboard is perfect,” said Kabi.

“So now you know the WaJesus family is growing, the second baby is coming and they’re a star already because they are making it to the billboard.”

Kabi further went on his knees and put his hands on Milly’s stomach while praying for their unborn child and his family.

The couple welcomed their first born son sometime in 2020, through a similar big reveal on YouTube.