‘President Kenyatta was held hostage in his first term,’ says Raila as he tours Thika 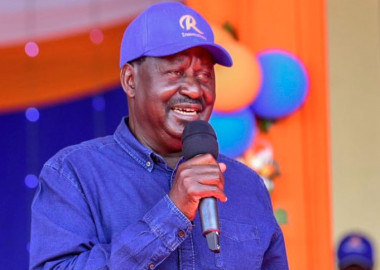 Orange Democratic Movement (ODM) leader Raila Odinga now claims that a section of government officials in President Uhuru Kenyatta’s administration actively hindered the Head of State from performing his duties during his first term in office.

In a perceived toned-down attack on Deputy President William Ruto, the ODM frontman underscored that there was a visible difference in critical services delivered by President Kenyatta’s administration during his second term in office as compared to his first.

“Uhuru was being held hostage by forces who wanted him to fail and then later on come and claim credit over those failures but you can see when he started working properly in his second term quite a lot has been achieved. In terms of infrastructure development those with eyes can see,” Odinga said.

Odinga was speaking at Mount Kenya University in Thika, Kiambu County, on Saturday when he took his Azimio la Umoja campaign trail to the Central Kenya town as he continues soliciting the region’s support ahead of the August general elections.

The former premier similarly reassured Kenyans that should he emerge victorious at the August polls, he will not sit idly but he would add on to President Kenyatta’s development legacy.

“I want to assure you that those kinds of works which are ongoing will be continued,” he said.

While reminiscing about Thika’s heyday as an industrial hub in the ‘70s, Odinga expressed regret at how far the once prosperous town had fallen, but reassured residents that his government would work tirelessly to return it to its glory days.

“Those industries died but Thika can still be transformed to become a truly industrious city. I know the kind of potential this city has so we can do very many things here,” said Odinga.

“This region has potential, people in this region are very good farmers. Given proper opportunities in terms of input to the farms and marketing opportunities this area can be very rich and this will create employment opportunities for youth.”