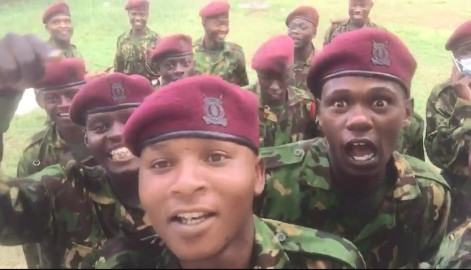 A controversial video of freshly-graduated General Service Unit (GSU) officers celebrating their pass out has sent Kenyans on Twitter (KoT) in an online debate.

The now-viral clip hit the interwebs on Wednesday after the 48th passing-out parade of the GSU at the National Police College Embakasi B Campus in Nairobi, where 2,502 officers graduated.

In the video, the gleeful young officers are seen crowing that they "are finally out" and they are the "bad squad in red beret," flashing the finger gun gesture while at it.

Some have gone online to defend the video saying it is part of the excitement common in other graduation ceremonies and that the uproar would not be seen were it not for the young officers’ use of Sheng’.

Kenyans on the other side of the divide, meanwhile, argue that the police are a hallowed lot, expected to be disciplined at all times.

Here are some of the reactions:

The National Police Service (NPS) has since condemned the video, terming it "irresponsible and reckless.”

“We wish to clarify and assure the public that the behaviour portrayed in the clip is not acceptable and does not reflect the values of the GSU, KPS and the NPS,” read a Wednesday statement.

“All graduands went through a rigorous value-based training modelled on democratic policing principles and designed to make them responsive and responsible officers of the law at the service of citizens.”

It added: “The oath of allegiance they took as part of their graduation is a testament to the sanctity of their duty to service.”

The police service expressed regret over the incident, further adding that an internal review is presently ongoing.