'Kenyans have accepted the idea of Raila as next president,' CS Munya says 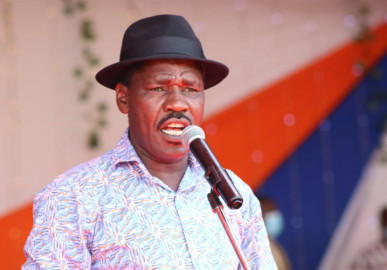 According to Munya, Odinga’s tactical move to involve the grassroots in his political campaigns has resonated well with Kenyans who firmly believe that the former premier will address their grievances should he emerge victorious at the August polls.

Munya was speaking at Mount Kenya University in Thika, Kiambu County, on Saturday when Odinga took his Azimio la Umoja campaign trail to the Central Kenya town as he continues soliciting the region’s support ahead of the August general elections.

The CS similarly lauded Odinga for his decision to partner with President Kenyatta in the now famous ‘handshake’ citing that through the deal, the duo have managed to unite Kenyans hailing from different parts of the country.

Munya then proceeded to take a swipe at Odinga’s critics underscoring that certain factions were preaching divisive politics instead of attempting to unite the nation, especially since the elections are fast approaching.

He consequently reassured Thika residents that Odinga would help improve the region’s agriculture sector should he clinch the presidency, citing that improving the industry is a key area that the ODM frontman intends to advance for the betterment of the locals.