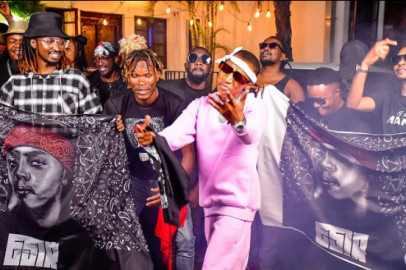 The Ochungulo family, a Kenyan gengetone group, has released a music video honouring Kenyan music legend E-Sir, who died some nineteen years ago.

The music video dubbed “Bandana ya ESIR” is a project by Nelly the Goon, of the Ochungulo family, featuring artists Nameless, Habib, Gmore and Trio Mio.

Nameless, who has always been a vocal supporter of E-Sir and has also had a close relationship with him, shared the video on social media, referring to him as a legend.

“To a legend that’s inspired a cross generation of artists,” Nameless wrote on Twitter.

The artists in the video carried a banner in memory of E-sir and wore  bandanas and a baggy shirts, which were known to be E-sir's signature look.

According to the video's description, E-Sir's musical influence is one that must be passed down to future generations of Kenyan musicians.

"Bandana Ya ESIR is a Kenyan urban pop cross generational collaboration to celebrate one of their own, Esir, A Kenyan Icon, an inspiration to many, who passed away 19years ago at the age of 21! With a need to introduce His legacy to the younger generation , Bandana Ya ESIR comes from the younger inspired generation and is guided by the veterans that knew him. it comes at a symbolic time that Esir would be turning 40!,"

The project will also see that the family of the hip-hop legend financially benefit from the dues of the music and his brand as a whole.

“The project has received positive vibes , love and blessings ,as the artists strive to also help the family finally benefit financially from the goodwill that the brand Esir and his music still receives!,” said the description of 'Bandana ya ESIR.'

Many Kenyans have often used E-sir as a gauge to rate how new and young Kenyan artists are performing in the market, with most failing to get to his level.

Time is yet to tell if the current younger generation will measure up.

E-sir would have been turning forty-one  this year.