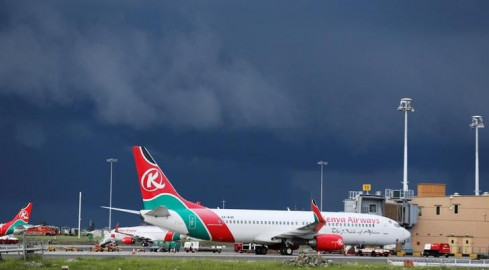 “The authorities are developing plans to restructure Kenya Airways and anticipate providing significant financial support over the medium term,” the IMF said in a new country report published on Thursday.

“Much of the projected $1 billion cost for KQ’s restructuring is unavoidable as the government had previously guaranteed Ksh.84.8 billion ($750 million) in debt owed by the airline, and KQ has run large arrears.”

Over the past three years, Kenya Airways has not been able to pay lessors and creditors due to severe cash-flow problems forcing the company to negotiate moratoriums and waivers to stay afloat.

The Treasury has told the IMF that the restructure of KQ will be a multi-year initiative which is intended to have the lowest cost effect to the exchequer.

“KQ will be required to trim down its network, rationalise frequency of flights, operate a smaller fleet and rationalise its staff complement,” Treasury said.

The government is expected to assume Ksh.93.5 billion ($827 million) of KQ’s debt and pump Ksh.53.4 billion ($473 million) in direct budgetary support across the 2021/2022 and 2022/2023 budget cycles to clear overdue payment obligations and cover the upfront costs of restructuring.

Meanwhile, Kenya Power which is currently under similar reforms to the national carrier is expected to receive Ksh.7.5 billion in the current financial year to clear its outstanding arrears, mostly for its last mile electrification project.

The World Bank is supporting efforts to address financial difficulties at the utility firm which is part of an expected funding program to Kenya under the Development Policy Operation (DPO).

Moreover, Kenya Airports Authority (KAA) and the Kenya Wildlife Services (KWS) will receive a combined Ksh.4.8 billion as temporary support to cover a fall in revenues due to the COVID-19 pandemic.