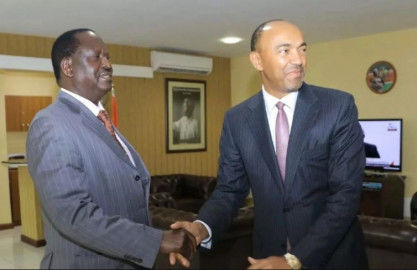 Orange Democratic Movement (ODM) leader Raila Odinga is returning to Mt. Kenya in his intensified campaigns across the counties in the region.

A section of leaders allied to Odinga from the region however now want former Gatanga Member of Parliament Peter Kenneth considered for a running mate position in the ODM chief’s camp.

Odinga, who has been on back-to-back campaigns touring 8 counties in two weeks, will kick off his tour in Laare town with a rally before proceeding to Maua town, Kianjai and later a public rally in Meru town.

On Tuesday, Odinga will kick off another round of meet-the-people tours with a rally in Nkubu, Chuka town and later an Azimio la Umoja meeting in Embu.

But even as the region awaits to receive the former premier, his allies from the other side of the mountain converged in Kangema resolving to push for a Raila Odinga-Peter Kenneth ticket at the ballot in next year’s polls.

Peter Kenneth, on his part, said: “Murang’a is an important equation, it is the cradle, and a time has come when Murang’a must also be at the top of the chart.”

Remarks by the lawmakers who attended a church service in Kangema on Sunday brought to the fore the behind the scenes negotiations and a vicious contest to be Odinga’s running mate once he declares his candidature.

Odinga on Sunday visited the late freedom fighter Dedan Kimathi’s widow Mukami Kimathi in Komarock, where he pledged to push compensation for the country's freedom fighters.