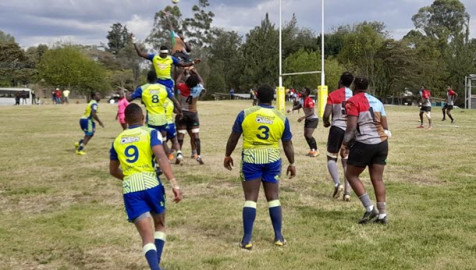 It was however at the ASK Showground in Nakuru where a nervy battle was witnessed as Menengai Oilers scorched Kenya Harlequins 16-15 to continue with their 100percent record.

Charging KCB RFC are not about to give up their Kenya Cup title just yet.

They are the dominant force in the local rugby scene and they made their opponents Impala Saracens feel their wrath clobbering them mercilessly for a 47-00 win Saturday while Kabras followed a similar pattern thumping Nondescript 24-00.

It was however at the ASK Showground in Nakuru where a nervy battle was witnessed as Menengai Oilers scorched Kenya Harlequins 16-15 to continue with their 100percent record.

Winger Timothy Okwemba was the first on the score sheet scoring a penalty after a successful maul to give Gibson Weru a 3 - 0 lead.

Inside centre John Okoth got the ball from opponent's 10 metres before offloading to Beldad Ogeta to score Oilers first try but Geoffrey Ominde missed the conversion.

However, Quins got their first try through Michael Onsando after a clear pass from Xavier Bett who went ahead to miss the extras taking the scoreline to 5 - 8 by halftime.

Quins started strongly in the second half with Xavier Bett scoring a penalty to draw the game 8 – 8 but they quickly suffered a setback after picking two injuries forcing them to make substitution for Charles kinyanjui and Wilhite mususi.

Outside centre Steve Ochieng then scored Oilers second try from a successful maul but fly half Ominde missed the conversion to give Oilers a 13- 8 lead.

Quins responded in kind Brian Onyiego going under the whitewash, his second try of the afternoon after a mispass from Okwemba, Xavier converting to make it 15 – 13 before Geoffrey Ominde had the final word with a last kick  penalty to hand Oilers a16-15 win.