'It's an honour,' Kayange speaks on his induction into World Rugby Hall Of Fame 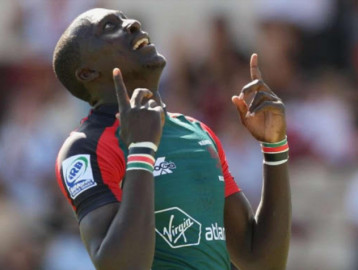 Former Kenya Sevens captain Humphrey Kayange has spoken out about his induction into the World Rugby Hall of Fame, terming it “an honour and privilege.”

Kayange, in a series of tweets on Wednesday evening, credited the support system he has had throughout his career over the years as playing a major role leading up to his induction.

“It is such an honour and privilege to be inducted alongside five other legendary rugby greats, while at the same time looking upon the recognition with humility and appreciation. The award for me is bigger than I as an individual, It's a reflection of the support I've had throughout my career and gratitude to all my teammates, coaches, family, friends, fans and organisations,” he said.

“Thank you to the World Rugby Hall of fame for the induction @WorldRugby @OfficialKRU @OlympicKenya, and the rugby fraternity locally and abroad, can't thank you enough for the platform and support. I have received all your messages and I'm humbled by the appreciation.”

He dedicated the award to those still playing the game, as well as their coaches and mentors.

“May this award be an appreciation to all those playing, coaching or mentoring and who give so much of themselves to rugby and sport. May the dream of becoming greater than our good inspire young athletes in our schools and communities to believe that they too can be the next generation of stars,” said Kayange.

“May sport always have its place in shaping our societies, producing responsible citizens and promoting healthier lifestyles.”

The World Rugby Hall of Fame recognises those who have made an outstanding contribution to the game of rugby throughout their careers, demonstrating rugby’s character-building values of integrity, passion, solidarity, discipline and respect on and off the field.

Kayange, inducted no. 150, became a history maker with his Shujaa teammates when they lifted their first ever Rugby Sevens Cup Final victory in Singapore in 2016.

He also appeared at two Commonwealth Games, in 2010 and 2014, and was part of Kenya’s first Olympic side.

The 39-year-old, finished his career on the World Series as Kenya’s third highest points scorer in sevens, was also part of the panel that helped Rugby Sevens become an Olympic sport.