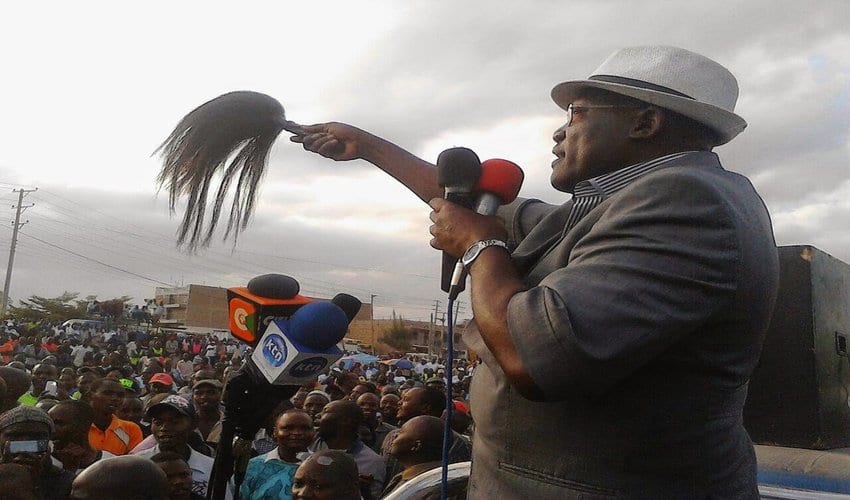 Pressure continues to mount on Machakos Senator Johstone Muthama to apologize for allegedly disrespecting the Office of the President and that of Devolution and Planning Cabinet Secretary Anne Waiguru.

Muthama, who has been accused of linking CS Waiguru and President Uhuru Kenyatta to an intimate affair and corruption, has been under fire from different factions to apologize while the police has been under pressure to arrest him for alleged hate speech and incitement.

It is alleged that Senator Muthama uttered words that are disrespectful to President Kenyatta, CS Waiguru and propagated hate speech.

The latest development has seen the clergy from the Lower Eastern region, which includes Machakos, Kitui and Makueni, call on leaders to respect the Head of State and his office saying that the President is a symbol of national unity and must not be abused or disrespected at any particular moment.

“The Presidency is a symbol of unity and must, should and ought to be respected by all peace loving Kenyans,” said the clergy.

The clergy, led by Bishop Charles Kababu of GCC Machakos, condemned the alleged utterances by a section of the Coalition for Reforms and Democracy (CORD) during their political rally in solidarity with the teachers saying that incitement may lead the country to violence similar to that experienced after the disputed 2007 presidential election that left at leas5t 1,300 people dead and over 600,000 others displaced.

The clergy said that even the Bible calls for respect for leaders and those in authority.

They further noted that the language used by leaders will have a direct impact on the children and younger generations since they learn from their predecessors and seniors.

On Friday, a section of women led by activists camped outside Parliament buildings protesting the utterances by Muthama saying that he demeaned women and their role in the society.

The protesters had threatened to camp outside the Parliament building until Muthama is arrested.

On Saturday, Muthama recorded a statement at the Directorate of Criminal Investigations (CID) over the alleged hate speech.

On Friday, Interior Cabinet Secretary Major Gen. (Rtd.) Joseph Nkaissery ordered for immediate investigations into the allegations of hate speech against the Senator who has been accused of undermining the Office of the President.

On Wednesday, during a CORD rally in solidarity with the striking teachers, Senator Muthama allegedly attacked President Kenyatta and CS Waiguru verbally, something that continues to elicit mixed reactions from the opposing political factions with the CORD coalition supporting him while the ruling Jubilee side calling for his immediate arrest.

Ruiru Member of Parliament Esther Gathogo, on Saturday, attempted to strip in protest of Muthama’s remarks which intimately linked Waiguru to President Kenyatta.

The MP was in Katongora village Friday afternoon to address a group of elderly women known as Green Army where she pledged to help them organize themselves in small constructive groups which will make it easy for administrators to look into their welfare.