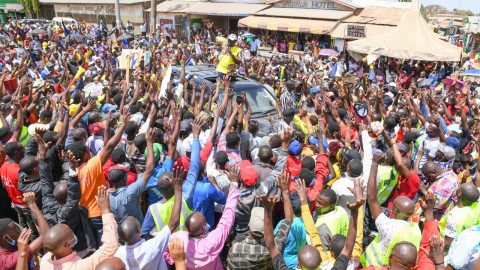 Deputy President William Ruto has promised to create 4 million jobs for the youth if elected president in the 2022 General Election.

Speaking on Monday in Makueni, Ruto asked his competitors to come up with realistic proposals on how to curb youth unemployment instead of hoodwinking them with handouts.

“Kenya cannot be built by stipends. We need jobs and business opportunities that will make them economically independent,” he said.

Ruto explained that youth unemployment was a serious issue that needed practical and sustainable solutions.

He said the Hustler Movement will deliberately implement programmes that will create jobs for the youth.

DP Ruto said he will invest in programmes that will create employment for the four million unemployed youth.

He said he will focus on empowering SMEs through SACCOs and transforming agriculture to make farming profitable.

Ruto said the revolutionary economic plan will ensure Government resources are distributed equitably and fairly across the country.

"It is only by changing the economy that we will be able to employ more youth, and empower small businesses," he added.

He spoke in Makueni County where he held a grassroots leaders meeting from Kibwezi East and Kibwezi West before addressing the public in Mtito Andei, Kambu, Kinyambu, Kibwezi, Mbuinzau, Kiundwani and Makindu.
The Deputy President said the Sh720 billion his opponent was promising youth was outright conmanship.