Cops recover four guns, ammo and six stones of bhang during a house raid in Isiolo 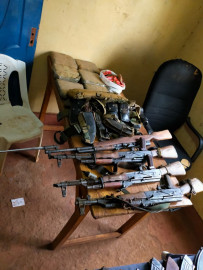 Police officers in Garbatulla, Isiolo are holding two suspects following a raid in which several guns and six stones of cannabis sativa were recovered.

According to a police report seen by Citizen Digital on Friday, officers acting on a tip off raided a house in the outskirts of Kinna town  at 5am on Friday.

“Also recovered were six stones of cannabis sativa and two numberless motorcycles, suspected to be getaway means used by the suspects,”